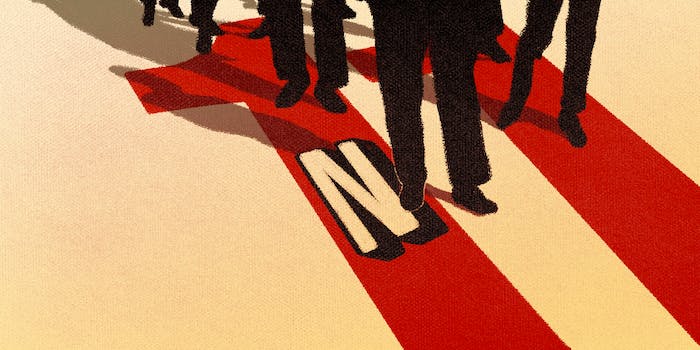 7 heist films on Netflix that steal the spotlight

All of a sudden, my fingers feel sticky…

There’s a popular saying that goes something like this: “There are two kinds of people in this world—those who perform heists and those who write about movies that are streaming on Netflix.” I may fall into the latter category, but I can still have a glimpse at how the other half lives, thanks to these great heist films on Netflix.

And who knows? Maybe this’ll be my last contribution to the Daily Dot. Perhaps I’ll be inspired by this roundup to assemble an array of expensive gear (and a small crew of amiable misfits) and plan a few heists of my own. If I had to pick a place, I’d probably go with the corner store down the street—I’ve already been casing the joint for about six months, and they only have one employee present past midnight, which would make it a piece of cake to walk out of there with at least one free Snickers.

I’m joking, of course—I’d never find a fence for something like a Snickers—but maybe you’ll be inspired to pull some jobs after watching these movies. Learning to crack a safe is no simple feat, but it’s surely less of a hassle than obtaining a college degree.

So, onto the films:

When director Justin Lin left the Fast and the Furious franchise and sent Universal into a scramble for a new director for the seventh film, F. Gary Grey may have not been a bad choice to replace him—because The Italian Job is basically Fast Five with Mini Coopers (and some boats, big trucks, and a helicopter).

The movie opens in Venice, and the first 10 minutes consist of slowly introducing us to The Crew, which goes like this: Hey, it’s Mos Def! Look, it’s Seth Green! OMFG IT’S JASON STATHAM. (There’s nothing better than Statham in a movie that’s not awful.)

After that, a heist is pulled that involves boats, scuba gear, explosions, and a mustachioed Edward Norton. It’s led by Mark Wahlberg and Donald Sutherland, and everything’s aces until they’re double-crossed by Norton’s character. That’s not a spoiler, because his pencil-stache spoils that long before it happens. Plus—it’s in the trailer.

And that’s it for Italy in the The Italian Job—the rest of the movie takes place in L.A., with the crew plotting revenge against Norton for trying to murder all of them (and also trying to get their gold bars back). Charlize Theron is a master safe-cracker for the LAPD, but she joins in on the shenanigans because Norton killed her father when he took the crew’s gold bars. That’s in the trailer, too.

The Big Finale Heist is the main argument for Grey taking on a Fast film: Much like in Fast Five, they basically destroy a city to steal something in a safe. And it’s glorious.

A sequel titled The Brazilian Job has been in development hell for the past 11 years, mostly because studios aren’t sure how to turn Mark Wahlberg getting a Brazilian into a full-length film, but I’m sure we’ll be able to see it as a direct-to-video release someday (maybe as a Netflix Original?).

Guy Ritchie rocked the cinematic landscape when his debut feature film took the Tarantino vibe created in the mid-‘90s, sent it on a meth binge, and then ran over it with an 18-wheeler. I can only understand 60 percent of the characters’ cockney accents, but I have no doubts that everything they’re saying is 100 percent badass.

Lock, Stock is a superficial film. The characters are completely one-dimensional, and that leaves the matter of depth entirely to the plot. But the plot is convoluted in the cheekiest, wackiest manner—which is good, because cheeky and wacky are the only ways that convolution usually works.

Because there’s a great deal of overlap in heist movie casts, this is the second movie on the list that isn’t terrible and has Jason Statham in it. This probably isn’t the most popular opinion, but if you only have time for one heist flick with a Statham involved, I’d say it’s a coin toss. Lock, Stock is an undeniable classic—with all the dirty celluloid, whimsical plotting, and consistent humor that Ritchie’s films would eventually (and unfortunately) grow out of—but Italian Job beats it hands down on a popcorn movie level.

If your pause button isn’t working on your remote, you’ll need to keep a bucket near for any potential restroom uses. You will not know what’s happening at all if you miss a minute of this movie.

Speaking of the all overlapping in heist films, here’s Edward Norton again—but in a much more central role and with a much better performance. This is prime Edward Norton, but the rest of the cast is nothing to dismiss either: Robert DeNiro, Marlon Brando, and Angela Bassett.

Well, OK—besides Norton, I wouldn’t say that anybody’s putting forth all that much effort. DeNiro and Brando are two actors that always either a) great or b) fucking fantastic, and here they’re just great. And Bassett is in it for maybe six minutes.

But let’s not dismiss the fact that this film lets us see two versions of Don Corleone sharing the screen in several scenes. Much like Niagara Falls, it’s not really a life-changing thing to lay your eyes upon, but it nonetheless needs to be seen—especially if it’s not costing you anything. Plus, the fact that Marlon Brando appears almost exclusively in bathrobes is very true to form, and it’s fun to imagine the hell he raised on the few shooting days on which he was forced to put on a suit.

If I were a graffiti artist, images of Brando from this film would be stenciled all over Fort Worth. And this image of Robert DeNiro is a real winner, too.

Director Frank Oz is an extremely competent director who’s brought us some great films, but his movies live or die on their scripts, and this one’s as by-the-numbers as possible. Much of the big heist planning plays out like watching a foreman and an architect discuss the construction of a parking garage, and the ending is fairly obvious. In a heist film, you always think you know what’s happening, but you expect to be thrown for a loop in the final minutes. There’s no such misdirect here; it lazily goes the route you figured it would. But at least you can feel free to go off to the bathroom without missing anything.

Michael Caine doesn’t usually appear in movies that aren’t shot in exotic locales—he once said he largely joins films for the traveling—so it’s surprising to see him appear in a film shot in one of the cities that he lives in.

In Flawless, Caine co-stars as the friend/foe of Laura (Demi Moore)—the only female staffer of London Diamond, the world’s largest diamond company, in the 1960s—and as a janitor in the building who’s been eavesdropping for 16 years, he hatches an idea for a heist and ends up dragging her into a plot to steal a few diamonds from her employer’s vault.

As the hardest worker in the company, she wouldn’t normally be interested in such a plan, but after finding out that she’s being canned for knowing too much information about a geopolitical strategy devised to save the company, her feelings are quite hurt (after all, she devised that strategy in the first place).

There’s a great feminist undercurrent driving the film, with Laura’s ultimate ambition to work as hard as possible to find the same success as a man could in her position, but it’s undercut severely by the fact that—even as her unfortunate circumstances are caused by misogyny—all of her breaks in fortune come from men too.

Any movie shot in 2007 with Michael Caine involved is expected to have excellent production value, and Flawless certain does—but the movie is hurt by the Big Explanation in the end. As Caine relays the full extent of the motivation behind his heist, it’s very heartwarming, but equally implausible and dumb.

Here’s another one with an ending that feels cheap and unsatisfying. As a matter of fact, most of this movie is unsatisfying: It has heist segments that seem to think they’re a lot more clever than they are, and it plays things gritty while ultimately being a giant male fantasy. It’s all guns and machismo, much like Lock, Stock, but without the exhilarating narrative engine that makes us overlook that movie’s shallowness.

BUT it stars Kevin Spacey, and he’s doing a Dublin accent that sometimes disappears. It’s also one of Colin Farrell’s first film roles, so there’s a character in Spacey’s crew that’s always around (albeit with only a few lines) who forces you to keep thinking Hey, that’s Colin Ferrell! It also has a flashback scene that gives Spacey a flowing Fabio mane to depict his character in the ’60s or ’70s.

So that’s worth 90 minutes of your time, right?

This is the true hidden gem of this roundup. It won’t leave you lying awake at night while contemplating its imagery and symbolism, but it’s a blast to watch.

That has a lot to do with the cast: Kurt Russell and Matt Dillon play half-brothers, Jay Baruchel plays Russell’s new-to-heists apprentice, Kenneth Welsh is a character named “Uncle” Paddy MacCarthy, and Chris Diamantopoulos is an eccentric French forger. Together, their crew dynamic is top notch. For enemies, they have Daily Show correspondent Jason Jones as an Interpol agent that’s working with thief-turned-informant Terence Stamp, who despises him.

The cast is helped along by a witty script with humor that never acts like it’s smarter than you and a plot that probably is. The ending feels earned—the big reveal segment, where you learn what’s really been going on, has so many deceptions to unearth that its length rivals the ending of Return of the King. But the reveals are great, and they don’t feel like they’re cheating. Instead, you feel like you really should have seen them coming, and that’s how a great heist film ends.

The direction is a bit like Soderbergh’s approach to the Oceans films: It’s slick but not forced; it camouflages itself to fit each moment perfectly. I wouldn’t be surprised to see writer/director Jonathan Sobol make a huge sleeper hit in the near future. He can seamlessly fuse comedy with an engaging plot, and he obviously works well with his actors, whose performances reflect that they’re all having a blast.

This is the fourth-highest-grossing film in South Korean film history, and it’s a bit reminiscent of massive Bollywood blockbusters: expensive locations, insane stunt work, extraordinary photography, and a cast with a light, chummy dynamic at the beginning that goes full Shakespearean Tragedy on each other by the end.

Some things probably get lost in translation here: A Chinese gang joins forces with a South Korean gang to pull off a casino heist, and a total of four languages are spoken. Even if it’s my fault for not being able to keep up because I’m a dumb American, an English audio option would have been nice.

Anyway, this is a really fun movie that’s plotted in a strange way that makes its 140 minutes feel like three hours, but the heists are impeccably staged, and the last big action beat is one of the most insane and lengthy shootout/chase sequences I’ve ever seen.

Total heists: 3 (plus an uncountable number of double-crosses)