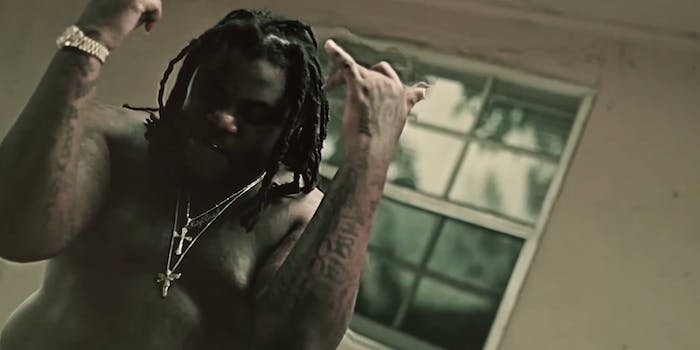 Every day, dozens of free rap releases hit the Web. These are the moment’s most interesting and resonant—and this week they come to us via the benches of rap’s most successful teams.

East Nashville rapper Starlito has a career spanning more than 10 years, since he was an underclassmen at Tennessee State University through his brief stint with Cash Money Records. He has willingly settled into being a sort of lone troubadour (albeit one who also makes collaborative mixtapes) exploring his soul. Introversion follows earlier mixtape titles such as Mental WARfare and Post Traumatic Stress, continuing ‘Lito’s confessional raps, with his expression of detachment occasionally retracted to reveal an understated depth that gets obscured.

Starlito is one of the best rap writers working today, but because he avoids pop song formats (though not super corny samples) and rapping louder than an inside voice, he’ll probably never find the success he deserves. He can paint beautiful imagery: “Crushed ice all in my watch and my cup/I come from watching the cops on the block with a tuck”; show off his deadpan humor: “Sauce dripping on my Scottie Pippens feel like I’m walking on air/Meant to say Balenciagas got a lot of them just bought four pairs”; keep it realer than most: “How many times them n***as shot at us? Shit not enough/Probably why I never got hot as Buck, but I didn’t give a fuck”; and tell a story: “Got a call from my homie ready to kill this n***a about some shit that happened 12 years ago.” There are five features with ‘Lito’s stepbrother, Memphis rapper Don Trip, a couple songs with another Southern naval gazer Kevin Gates, and one with fellow Cashvillian Young Buck. Starlito’s anxiety is a constant, but at one point he utters, “Peace with myself coming soon.” Whether that’s a new album or a new state of mind, I sure hope so.

Remarkable reference: “Shell shock shorty on the block with that 40 like Shawn Kemp in ‘94.”

Rick Ross has squandered countless rap careers. Not by intimidation or, like, out-rapping anyone, but by signing them to his music label Maybach Music Group and apparently losing their paperwork behind a filing cabinet. Other than Wale, who gets all his studio time and promotional material from Atlantic Records; and Omarion, who’s only kind of relevant because of Love and Hip Hop: L.A., every artist on MMG could pool their money together and barely buy a Mazda, let alone a Maybach.

Northeast D.C. rapper Fat Trel signed with Ross in 2013 and has yet to have a proper single or album. It’s disappointing because Trel was supposed to be a great D.C. rapper. He was everything that fellow Washingtonian Wale wasn’t–fully embraced by the city, effortlessly charismatic, and he could rap like he could kill you. But Trel got into downers and started hanging out with Tommy Hilfiger’s rapping progeny. These things have not helped the rapper’s creativity.

Georgetown is only the second mixtape Fat Trel has released since 2013, which might also be the last time I really liked a Trel track. Don’t get me wrong, I can appreciate the hell out of his rapping, but I haven’t listened to any of his songs more than five times since his “Started from the Bottom” freestyle. But he keeps making music and I keep listening for something good. I did like the 808 Mafia-produced “Wzup wit Me” and “I’m Ill,” featuring one of Trel’s Slutty Boys, Boosa da Shoota. Elsewhere, “Funky Style” is a campy New York tune that samples Milkbone’s 1995 classic “Keep It Real.” “I’m da Type” has much better rapping than the beat deserves, and “Murder Gardenz” is the best song on the tape, with a music box setting the scene for Trel’s urban marauding.

Remarkable reference: “Dick so big when I put it on a wig thought my daddy was a elephant.”

I’ve wondered for a while what a Skooly solo tape would sound like. He’s half (used to be a lesser fraction before they became a duo) of Rich Kidz along with RKaelub, who emerged out of Atlanta’s late aughts swag rap scene and have evolved into something far more polished. Their shiniest moment might be “My Life” featuring the rapping equivalent of the Kool-Aid Man, Waka Flocka Flame. Their collaboration sounds like being shot into outer space in a spaceship full of molly water. Rich Kidz have steady been releasing some of the most fun rap music out, but it often sounds like Skooly is the only one who brings the energy.

Skooly is the one bouncing off the walls and the one snapping the hardest on the vocals in every Rich Kidz song. Unfortunately this isn’t the perfect mixtape from which to launch a solo career, but there are some songs on here that turned me into an on-beat contortionist. Skooly has a talent for rapping increasingly more shrill on a track without ever losing the melody, but the songs on this tape are mostly too slow for anybody to wild out to. On “Simple,” Skooly threatens to shoot up your spot over some Goo Goo Dolls jangly guitars, then a crazy electric guitar solo shows up on “Bacc on My Shyt,” and there’s also a piano-driven ballad called “Cry Me a River.” Only on “Everything” does Skooly really get loose—the beat all but getting out of the way for a cresting tide.

Remarkable reference: “More stripes than Adidas/Catch a n***a like a Randy Moss.”

Sometimes the word “alternative” is used as a vague signifier, like how every rock song in the ‘90s by anyone besides Bruce Springsteen was labeled alternative rock (alternative to what?). But when Chicago rapper Lucki Eck$ dropped his debut mixtape, Alternative Trap, it truly was out of left field. While Eck$’s hometown was deconstructing Atlanta trap rap and white European producers suddenly started calling their dubstep music “trap,” Lucki was conversationally tongue-twisting punchlines over trippy bedroom beats.

His second mixtape, last year’s Body High, had both more complex production and more traditional song structures. After making a tape with a lot of good and unusual rap songs, he’s almost moved past rapping altogether on his newest, X. There was hardly any singing on Lucki’s earlier output–occasionally he would float off into a Big Sean-like sing-songy flow, but he fully embraces that talent here. In the past, he has drawn comparisons to A$AP Rocky because of the shared influences that came from outside their own regions, especially as a specific style was drilled into place in Chicago at the time of Lucki’s debut.

Here, a big influence seems to be the rapper who came to embody that specific Chiraq sound, Chief Keef, and indeed Lucki explores that same darkness. Keef himself has become somewhat of a loner with increasingly abstract rap songs, and that is where Lucki is most comfortable. Oddly enough, there’s a song called “Mia Wallace,” which is now the second song about Uma Thurman’s Pulp Fiction character out right now, and there’s a subtle remix to the beat of Mike Jones’ 2005 classic “Still Tippin’,” on which Lucki somersaults from flow to flow. The song with Chance the Rapper and Young Chop, two Chicago artists with contrasting styles, doesn’t even stand out but for Chance’s squeaky voice. On the rest of the mixtape, Lucki Eck$ may have found his sound, but unfortunately now a lot of the songs kinda sound the same

Remarkable reference: “You like the town(?) I referee/I like riding around to Meek/I fuck the line I sneeze the beat/I take my time I need to breathe.”

It’s been an unnervingly long four years since ATL rapper Trouble’s most successful song, “Bussin.” In 2011, anyone with a massive, hulking, Lex Luger beat and guns pointed at the camera could potentially write a hit. Trouble kind of did with “Bussin,” a first-person hood horror movie complete with constant cocking and firing sounds that got a remix with three rappers who are more famous. And then I didn’t hear from him again. He’s apparently been putting out mixtapes, features–even an album–and he was also shot multiple times last year, but he’s almost assuredly ruined any chance of a moderately successful rap career. This new tape has every song clocked in at 3:29, despite none of the songs lasting that length. There is a long silence at the end of every track on #ZayDidIt, sometimes more than a minute, and apparently not enough people cared to do anything about it.

At the same time, producer Zaytoven is the Mozart of late-aughts Atlanta rap. He struck gold with the Migos’ “Versace” a couple summers ago, and even though that success has been a rarity this decade, and he may not have made a new beat since Obama’s first term—or at least I would 100 percent believe anyone accusing as much—I just can’t turn down those dulcet piano tunes. Every song sounds formulaic, but it still makes me feel like spinning around in an office chair. Trouble isn’t a bad rapper or anything: The hooks are clumsy but they hit their target, and the couple songs with Bankroll Fresh are improved. It’s just hard to praise something so shoddy.

Remarkable reference: “Just don’t sit there on your Instagram/Acting like you don’t really give a damn/How could you switch up on me?/How could you give up on me?”