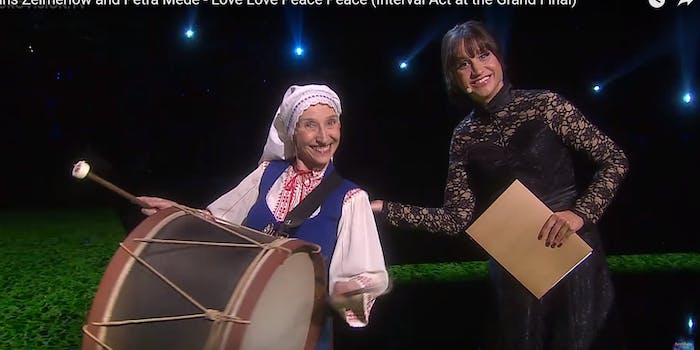 The best and weirdest Eurovision music videos of 2015

This year's Eurovision runs the gamut from a shirtless guy with an eagle to a protest song about genocide.

Eurovision: a beautiful celebration of music, sequins, and international cooperation. Alternatively, a fantastic opportunity to get wasted and make fun of cheesy pop music and petty European feuds. Either way, it’s awesome.

The 60th Eurovision Song Contest takes place next month, and unless you’re an obsessive Eurovision spoiler-phobe (do those even exist?), you can already check out the contestants on YouTube. We’ve selected a few of the standout numbers, from corny Europop to a controversial song about genocide. (Actually, the protest song is also corny Europop. Eurovision is a magical place indeed.)

This is basically everything you could hope for from a Eurovision video. Within the first 15 seconds, we have some kind of fantasy landscape, a male model wearing a leather vest and no shirt, and a live tiger. Vocally, it sounds indistinguishable from at least 10 other Eurovision entries this year. But we all know that the presentation is what counts.

Pertti Kurikan Nimipäivät is already an established band in its own right, which is more than you can say for most Eurovision artists. It’s a punk band whose members all have developmental disabilities, and they were the subject of a documentary called The Punk Syndrome back in 2012. As far as we can see, they’re the only group this year not performing some variation on pop, rock, or folk music.

Australia, as you may already know, is not in Europe. But for whatever reason, Eurovision decided to invite their friends down under to submit a guest entrant this year. Australia’s contestant is a singer-songwriter called Guy Sebastian, the kind of name that could only possibly be given to a Eurovision artiste. Clearly, this is his destiny.

No Eurovision is complete without some kind of political controversy, and this year, the focus will be on Armenia. Last weekend marked the commemoration of the centenary of the Armenian Genocide, when an estimated 1 million people were exterminated as a result of Ottoman government policies. Though Pope Francis and Kanye West acknowledged that anniversary, the present-day Turkish government refuses to admit that the genocide took place, a stance that continues to be highly upsetting to many Armenians.

Armenia’s entry makes no explicit mention of the genocide, but its original title was “Don’t Deny.” The music video shows a 1915-era family slowly disappearing as a group of international vocalists from the Armenian diaspora sing, “Face every shadow you deny.” France’s entry is also believed to be a message of solidarity with Armenia, inspiring more than 400 people to sign a petition demanding that France and Armenia be disqualified for politicizing the event.

Someone always attempts (and inevitably fails) to explore a trendy genre of music at Eurovision, and this year it’s the U.K., keeping up with the zeitgeist of 2011 with an electro-swing number. Highlights include fake American accents and lyrics like “You’re bound to get sneezes/And nasty diseases.”

Is Switzerland’s entrant wearing a hipster racist interpretation of an American Indian headdress? If so, it wouldn’t be the first time a Eurovision performer has gone this route, with the Netherlands’ Joan Franka inexplicably wearing a war bonnet during her performance in 2012.

No one is grabbing us as this year’s equivalent to Austrian drag queen Conchita Wurst, but some of these videos probably give a deceptively normal first impression. Once we get to the contest itself, things are bound to get weirder.