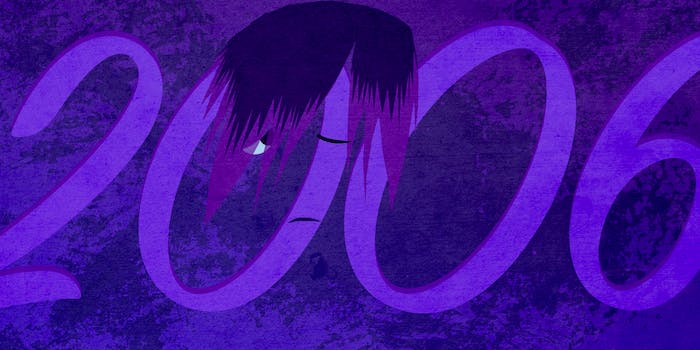 My Chemical Romance or Brand New: Who ya got?

The emo genre enjoyed a commercial peak 10 years ago. But it was a fleeting crossover that washed out because of shockingly bad music.

By then genre giants like Dashboard Confessional, AFI, and Yellowcard were releasing over-produced, calculated pop albums. Hell, even Brand New and My Chemical Romance—2006’s most successful emo creatives—were seen as weathered veterans.

For most of the early 2000s, emo was a farm league for major labels. Beginning with Fall Out Boy’s 2005 From Under the Cork Tree, continuing that autumn on the backs of Panic! At the Disco’s MTV Video Music Award-winning A Fever You Can’t Sweat Out, and ending with Jay Z doing the introduction to FOB’s 2007 Infinity On High, this was emo’s Myspace-fueled mainstream takeover.

Terrible undercard bands—Hawthorne Heights, Cute Is What We Aim For, the Red Jumpsuit Apparatus—landed in your top 8 and made money. You might remember some of this music fondly—I was at a Warped Tour in 2006, we are not so different—but it is almost all bad because of its sexism (try not to gag listening to “The Curse of Curves”) and pre-packaged ideas.

5) Thursday — A City By the Light Divided

Though it reached No. 20 on the Billboard charts, the fourth album from the one-time New Jersey saviors arrived with a dull roar. It had a bunch of synthesizers and piano lines, and post-hardcore purists groaned. The band is reuniting next month and that should please its dove-tattooed contingent. A City By the Light is clearly the third-best Thursday record, but it’s ambitious and has aged with poise.

While Dashboard fell on its face making Dusk and Summer—an album so sweet it’ll give you type-2 diabetes—Adam Lazzara’s boys were always more interested in being the next U2 than incubating the scene. “MakeDamnSure” might blatantly rip off that Saves the Day lyric about tangled veins, but its every turn fills up arenas.

3) Cobra Starship —While the City Sleeps, We Rule the Streets

For a defining totem of emo-pop, look no further than this bait-and-switch synth-pop project from former Midtown singer Gabe Saporta. (Head Automatica’s Popaganda—which stemmed from the ashes of hardcore legends Glassjaw—is interchangeable.)

2) My Chemical Romance —The Black Parade

This gigantic roar of a stadium album borrowed liberally from David Bowie and Queen. It fused vague themes about love and death with big chords and neat costumes. While MCR toured with the reprehensibly static mannequins from Muse on this cycle, they did it with a sea-tossing punk spirit. As this month’s false flag report of a reunion showed, the attention to theatrics still means a lot to many.

1) Brand New  — The Devil and God Are Raging Inside Me

I thought that this album was pretentious and uselessly dense, and stubbornly ear-marked it as a failure at my college newspaper upon release. While the Pitchfork crowd praised Bon Iver’s For Emma, Forever Ago as a luminary tribute to working out your feelings in the woods, Jesse Lacey’s lot boiled a more futile, seething project that sounds like the depressing week between Christmas and New Year’s. It’s lasted with more urgency and layers than anything else released in 2006—and that includes T.I.’s King or Joanna Newsom’s Ys.