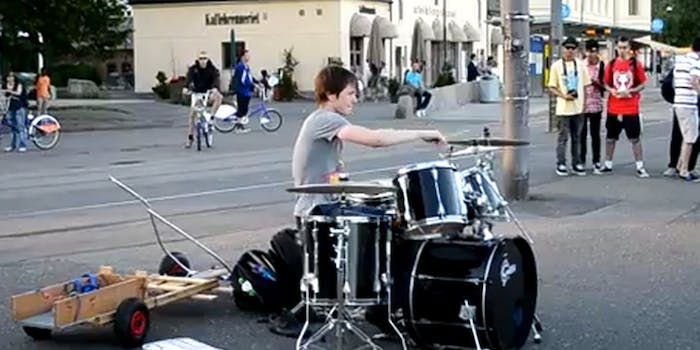 With no disrespect intended for Bill Ward—or the 40,000-strong Facebook campaign that supports him—Baard Kolstad proves in exactly four minutes that he has the chops to back Ozzy Osbourne and company—and stop random people in their tracks.

While posted several months ago to YouTube, “Baard Kolstad, the best drummer in Norway!!!!” recently jumped to the top of Reddit’s video section in the last two hours, racking up more than 100,000 views in the process. One clever user even tracked down the exact location of the performance.

“Wow,” posted bopcat. “Hope this guy gets picked up by a famous band because of this vid!”

“You know what I want to see, is one of these epic drummer guys then suddenly an epic guitarist rocks up and joins in.,” added BigAdam2050 on YouTube. “They form a band, get rich, have a down spiral bit on drugs but some people call it their best﻿ works, they go rehab, come back, but its not as good apart from that one album but then in their twilight years they start to kick arse again. I live in hope.”

Kolstad isn’t your average street artist, though. According to his official Facebook page, he recently won the 2012 V-Drums World Championship in Los Angeles, and his video at Karl Johan from February 2011 has clocked more than half a million views.