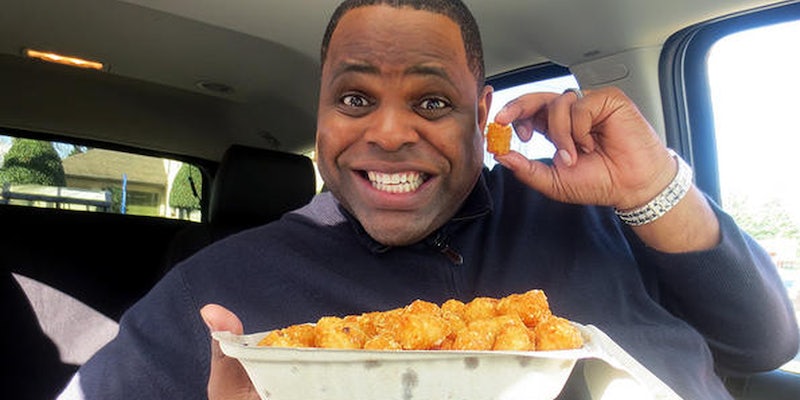 Daymon Patterson, the YouTube star best known for his viral 5 Guys Burger and Fries review, discusses his leap to TV.

It’s early for an interview, 7:30am to be exact, but it’s the only time that Daymon Patterson can fit me in. The larger-than-life YouTube star, best known for his reviews of fast food menu items from the front seat of his four-door sedan, is in Puerto Rico, vacationing with his wife and toddler. Come 8am, “wifey and baby are ready to hit the streets of PR.”

It’s likely the last time he’ll get to enjoy a minute to himself for a while. His television show—inspired by his unbelievable review of 5 Guys Burgers and Fries that helped him rack up more than 130,000 subscribers—makes its network premiere later this month, and he’s readying a big media blitz upon his return to his native Connecticut.

“Best Daym Takeout,” he says in a manner that suggests he’s been repeating the show’s title every five minutes since its program was conceived. “July 31st, 10pm on the Travel Channel. We’re going to be looking at food in a completely different light.”

What he means by that is that his show, which will run on a six-episode limited season for the first run, is out to change the way that cable networks cover food.

“I’ve watch a lot of food shows,” he says, “a lot of Food Network. And you watch how it’s prepared and they get into the ingredients and the way they create the dish from beginning to end. Maybe they take a bite and say it’s delicious. OK, great.

Here’s how Patterson’s show’s boils down: Each week, Patterson will be seen scoping out the locales within a number of different American cities. The first two are Chicago and New Orleans. He’ll cruise around the city a bit—play the “six-foot-five, 400 lbs. of cocoalicious lovin'” tour guide—then check into three restaurants based on the suggestions of his Facebook and Twitter fans and followers.

“Mom and pop locations,” he stresses. “Nothing national. These spots are in your own backyard.”

Once inside each restaurant, Patterson will exchange his pleasantries with current diners and staff and get everybody fired up for the fact that there are cameras in their restaurant and Daymon Patterson’s dropped by.

He’ll stop inside the kitchen, walk back into the dining area, “and then I literally make a to-go order that, once it’s ready, and I tell the people at the counter this, I will take to the front seat of my vehicle right in front of their establishment and break it down the same way I break it down on YouTube.

Patterson isn’t the first YouTube star to make the leap to television. Annoying Orange has found success on Cartoon Network, Lucas Cruikshank’s Fred got picked up by Nickelodeon, and there’s been serious talk of Smosh making a similar leap. B

But Patterson’s success is still a rare phenomenon, and it’s all happened in a span of eight months—dating back to Oct. 25. That’s when he quit his job at CarMax in Connecticut and started making YouTube food reviews professionally.

“I’d never seen this day coming,” he says. “I was perfectly happy seeing new subscribers come to my YouTube channel. That GhettoNN movement, that was my thing. Daym Drops. I finally had my first 1,000 subscribers. That 1,000 turned into 10,000, and I was like ‘Wow, that’s crazy. You get a viral video and now everybody’s checking out what you’re doing.’

“And now I get a TV show out of it? That’s a dream come true, in more ways than one.”