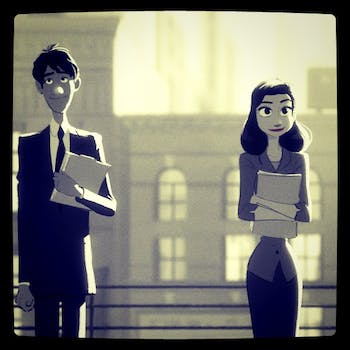 Shorts International Chief Executive Carter Pilcherwhich stated that the films would cause "significant, if not irreparable damage" to their theatrical release if they continued to stream them online.

If you wanted to check out one of the five films nominated for Best Animated Short before Oscar Night, you just lost your chance.

The films, which were posted to YouTube and Hulu last month, have been pulled offline just days before the Oscars on Sunday, the Verge reported.

Although Fresh Guacamole had been online for viewers since last March, it was Disney’s online push for Paperman, the animated short that appears before Disney’s Wreck-It Ralph (which is nominated for Best Animated Feature Film), that set the precedent. Disney released the short on YouTube after it received the Best Animated Short nomination, which gave the film extensive coverage. Looking to benefit as well, the other films soon followed Disney’s lead.

Now all of the nominated short films have been taken down, after a letter from Shorts International Chief Executive Carter Pilcherwhich stated that the films would cause “significant, if not irreparable damage” to their theatrical release if they continued to stream them online.

The letter, which was leaked online by Deadline, further demonstrates the divide between online content and mainstream entertainment.

“Unlike Webbies or Ani’s, the Academy Award is designed to award excellence in the making of motion pictures that receive a cinematic release, not an online release,” Pilcher wrote on Feb. 14.

“This release of the films on the Internet threatens to destroy 8 years of audience growth and the notion that these film gems are indeed movies—no feature length film would consider a free online release as a marketing tool!”

Pilcher was prompted by independent theaters, which threatened to pull the short films if they remained online, due to plummeting sales.

While releasing the shorts online may create and attract buzz, he pointed out that that won’t actually help them win an Academy Award.

“The fact that all the films were put online is perplexing as Academy voters have other and better means of viewing the films,” Pilcher explained, possibly feeding into some people’s belief that the Academy voters are old and boring.

He gave the filmmakers until Feb. 15 to remove their films from the Internet so that no film suffers a disadvantage. All of the films have since complied.

Wired’s Graeme McMillan noted that while Paperman and Maggie Simpson were made by big studios and didn’t really need the online exposure, the other nominees (Adam & Dog, Head Over Heels, and Fresh Guacamole) were independent productions that could have benefited from the free promotion.

But when YouTube views can now help determine a Billboard No. 1 hit, Nielsen will finally include online streaming in measuring ratings, and a Web series can take home an Emmy, it’s becoming harder for mainstream entertainment to dismiss online platforms as an effective marketing tool.