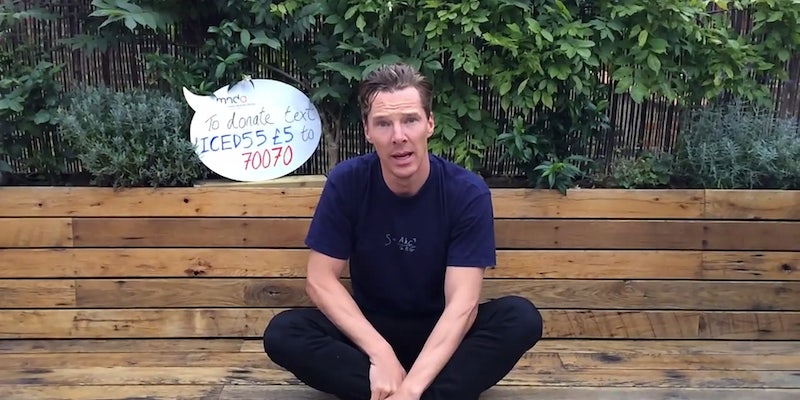 Benedict Cumberbatch gets ice-bucketed in a suit, in the shower, on the street

We can all thank Tom Hiddleston for making our Friday.

He, like seemingly everyone at this point, had been called to complete the ice bucket challenge to raise awareness and donate to the ALS Association (which has raised $53 million in donations), and he carried it out in an eye-catching fashion. Drenched, he called for Benedict Cumberbatch to take on the challenge himself.

BC & @TheRealLukevans – you have 24 hours to respond. #IceBucketChallenge

While Cumberbatch didn’t complete the challenge in 24 hours, he did eventually deliver. And even if you’re sick of ice bucket challenges at this point, his is worth watching.

As an ambassador for the Motor Neurone Disease Association (a charity that raises money for diseases like ALS), he decided to use his ice bucket challenge to bring awareness to that charity and gave people in the U.K. a phone number to which they could text donations.

And even though he’s been nominated more than once, he thought he could get away with just doing it once. He thought wrong.