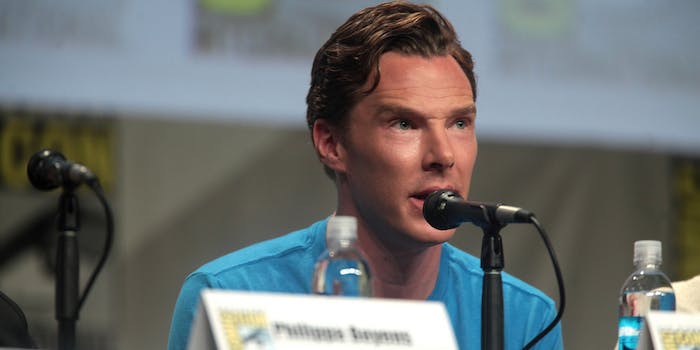 Benedict Cumberbatch says people filming him on stage is ‘mortifying’

To record or not to record; that is the question.

Actor Benedict Cumberbatch, of Sherlock and The Imitation Game fame, recently stepped out of the stage door of the theatre at which he’s performing and asked patrons not to film him in his current role.

On Saturday, Aug. 8, the actor exited the Barbican theatre in London where he is filling the title role of William Shakespeare’s Hamlet and told the fans waiting there that there is “nothing less supportive or enjoyable” than seeing a “big red light” from smartphone while he’s on stage, describing the sensation of being filmed as “mortifying.”

The Saturday performance was hamstrung by technical problems and the filming made restarting the play—believed by many to be the greatest play in the history of the English theatre—even more difficult.

“What I really want to do is try and enlist you,” he told the crowd. “I don’t really use social media, but I’d really appreciate it if you did tweet, blog, hashtag the shit out of this [message] for me… I can see cameras; I can see red lights in the auditorium. … There is nothing less supportive or enjoyable as an actor being on stage experiencing that, and I can’t give you what I want to give you, which is a live performance that you will remember hopefully in your minds, your brains—whether it’s good, bad, or indifferent—rather than on your phones.”

He warned that the theatre would get strict and begin evicting people if they didn’t police themselves.

“This isn’t me blaming you,” he said, “this is just me asking you to just ripple it out there, in the brilliant, beautiful way that you do with your funny electronic things.”

For years, the theatre has struggled with the possibilities and demands of social media, and the harm it can do to the fragile egos of actors and other stage professionals. When they do decide to employ it, they sometimes make massive misjudgments that set the cause back years.

No one can fault Cumberbatch for the meat of his message. If mediating art with the constant employment of personal technology is off-putting to an audience member, it must be profoundly distracting to the artists.

Cumberbatch’s Hamlet opened last Wednesday to mixed reviews, one writer calling his portrayal that of an “oleaginous electric eel” and another calling it simply “electrifying.”

The theatre is a complex environment. Given how responsive it is to human emotion and ideas, we can hardly expect it to deal with the equally complex environment of social media with the same win-through-failing attitude that characterizes Silicon Valley. If journalism took as long as it did to reconcile the technology with its mission, how much more demanding should the stage be?

“As with all change, the pendulum must swing to each extreme before settling in the middle,” Ann Swerdfager, publicity director for Canada’s Stratford Festival told the Daily Dot. “We feel we have found a happy medium for the use of social media here in Stratford. And I’m sure other theatres will as well.”

Still, many years have gone by without productive discussion among the theatre professionals about how best to use this new technology. At its best, social media can amplify and extend the exhilaration of live performance. At its worst, unselfconscious audience members can sabotage the moment of communication by recording it.

“Social media gives people of all walks of life an opportunity to share their experiences and opinions with like-minded folk,” said Swerdfager. “What better recommendation can there be? The Benedict Cumberbatch, Hamlet is introducing thousands of people to theatre.” In fact the play is the fastest-selling show in British theatrical history.

“I’m sure Mr. Cumberbatch’s main concern is that they enjoy what they see and return to the theatre. He’s simply requesting an environment that allows him to give each audience member their money’s worth.