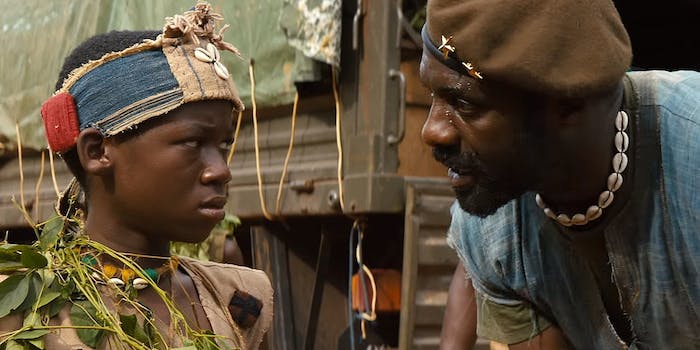 Netflix debuts its first feature film, ‘Beasts of No Nation’

As we learn in the first line of dialogue: “Our country is at war, and we are having no more school. So we are having to be finding ways to be keeping busy.” It’s the voice of Agu, played by Abraham Attah, the narrator of Beasts of No Nation. We’re drawn into his world through an “imagination TV,” the shell of a television set that serves as a medium for their homemade entertainment.

From there, Beasts of No Nation, directed by True Detective’s Cary Fukunaga, gets gradually darker and never really lets up.

The Nigerians are the peacekeepers, Agu says, but we’re never told where exactly this war is. After his father is murdered and Agu is captured by the Commandant (Idris Elba), he tells his army a “boy is very, very dangerous.” And then we see how Agu adapts.

Based on Uzodinma Iweala’s 2005 novel of the same name, Beasts leads us deeper into Agu’s new life as a child soldier, but Fukunaga threads the film visually, luring us in with gorgeous greens, purples, and reds, especially in one drug-laced attack scene that mirrors True Detective’s beauty-into-unspeakable-horror moments.

Commandant later calls his army a family, which colors the next scene of Agu’s “induction” with even more dread. Theirs is an unnamed country of men and boys, but the line between the two is blurred with the help of drugs, among other things. We see the story of Agu through his eyes, but we don’t learn much else.

When Agu is told to kill an engineering student, Commandant’s emotional trigger is just one of the subtle ways in which he breaks down/builds up his “family.” Elba fully inhabits his character’s charm and motivational speeches, but we see the menace in the corners of his eyes. “I’m a good follower, sir,” Agu tells him in another scene, before we’re given an idea what that means in this family.

Beasts of No Nation is the first non-documentary film that Netflix has produced. It dropped $12 million on the title, making an aggressive push at awards season. The film’s production was beset by illness, injury, and near-death experience. Fukunaga told the Guardian: “Every day I had a sinking feeling inside, not knowing if we were going to have a movie by the end of it.”

It’s a gamble for Netflix to take on a first feature—indeed, Beasts feels like it could do just as well on HBO. But it’s also a visual film—best experienced in a theater—and one that demands attention. At over two hours long, with some drops in narrative structure in the third half, Netflix viewers might tune out and come back later, which interrupts the film’s emotional flow.

That’s why the experiment with a dual release model—the film debuted today in theaters and on Netflix simultaneously—is so intriguing. Several theaters are already balking at the idea, but it also gets more eyes on a movie that’s not going to have a huge opening weekend and doesn’t have an immediately tangible fanbase.

It’s the beginning of a bigger experiment with feature film for the company: Pee-wee’s Big Holiday and Brad Pitt’s War Machine are just a couple of the titles on Netflix’s film schedule, which extends into early 2016. It will be interesting to see how Beasts adapts.