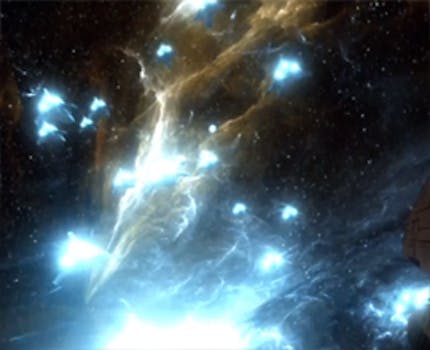 After two years of rumors, the highly anticipated SyFy series has ended up on popular YouTube channel Machinima.

After two years of speculation, leaked footage, and vacillating, Blood and Chrome, the latest storyline in SyFy’s acclaimed reboot of Battlestar Galactica, is finally airing—as a Web series.

Fans of the show have been eager for more of the Battlestar Galactica (BSG) universe since the series ended in 2009. Even though the short-lived series Caprica, a prequel, got yanked mid-season due to low ratings a year later, the franchise has continued to enjoy popularity and critical acclaim.

In 2010, BSG’s executive producer Michael Taylor announced an addition to the series to take place in-between made from digital reconstructions of the set from the show, which takes place upon a behemoth of a space warship.  Set in-between the events of Caprica and the events of BSG, Blood and Chrome stars Luke Pasqualino as a young William Adama, the general who later becomes Commander of the battered old warship Galactica.

Blood and Chrome was first envisioned as a web series, then greenlighted as a two-hour pilot for a possible new show in October 2010. Just five days after that announcement, however, SyFy cancelled Caprica due to low ratings and clear lack of interest from fans. Though the network seemed frustrated with a BSG fanbase that appeared to jettison the franchise as payback for what many viewers saw as a lousy series finale, they seemed eager to move ahead with the new story. Taylor called the concept of Blood and Chrome “pretty damn cool” and described it as a “contemporary war movie.”

But when months went by and no pilot appeared, fans grew more and more confused, and an epic game of tag ensued as producers tried to figure out whether their show was a TV pilot or a web series.  AOL TV reported in August of 2011 that Blood and Chrome was still in post-production, and that producers were torn between formats. In February, BSG composer Bear McCreary announced that he had completed scoring on the two-hour pilot; less than a month later, Deadline reported that the movie was off and the web series was back on, though SyFy’s original programming head Mark Stern promised that “the 90-minute pilot movie will air on SyFy in its entirety at a future date.”

That announcement came on the heels of leaked demo footage for the pilot, presented at WonderCon as a “trailer”.  The fake trailer racked up over 100,000 views in 24 hours before NBCUniversal pulled it due to copyright restrictions on the theme song.  Here’s a version of it with different music:

A few months after that, Bleeding Cool insisted that while at Comic Con, the BSG producers were “convinced Blood and Chrome is still on the table as a series for SyFy.”  But SyFy’s decision (they were “trying to figure out the economics”) remained firm.

Finally, last week, EW announced that the series would be coming to Machinima Prime, a YouTube channel dedicated to airing the best series found at Machinima.com, one of YouTube’s biggest networks and home to fan-made gaming videos and web series. The news joined with a trailer—a real one, this time—whose production values were all the evidence anyone needed that Blood and Chrome was designed with the SyFy network in mind.

Of course, bringing those production values to the web instead of television presents fewer and fewer risks these days, as the audience for web series continues to grow. The BSG franchise has been betting on that phenomenon ever since it began: at critical stages in-between air dates, the series relied on brief webseries to provide supplementary material and fill in the storyline of the main series.

Before the original pilot aired in mini-series form, a series of “featurettes” of additional material debuted on the SyFy website (now only available on DVD).  During the long hiatus between seasons, two separate web series aired—”The Resistance” and “The Face of the Enemy,” which won a Streamy for Best Dramatic Web Series.  It was transmedia done brilliantly, and became an example that many other productions have looked to when integrating storylines across formats.

SyFy will eventually release the series, which will air in ten parts on Machinima’s YouTube channel, as a two-hour film.

In the meantime, you can watch—and marvel—at the first two episodes, along with the other two million viewers who’ve tuned in since Friday.