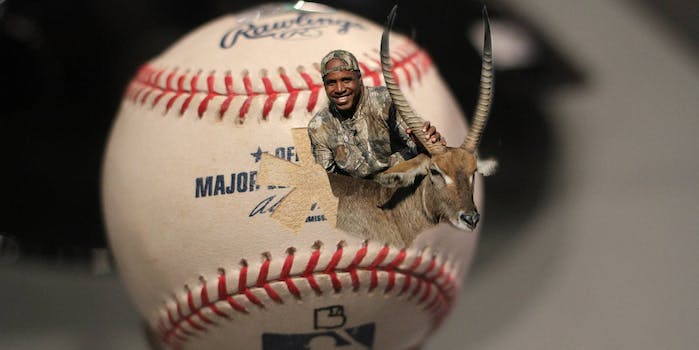 Put an asterisk on that elk's head.

Here, have a look.

Bowed this gems buck in Africa..

Naturally, PETA issued a scathing statement about Bonds’ bow skills in Africa and wherever large elks are killed. Reached by The Big Lead, the animal rights organization condemned the former San Francisco Giants’ behavior, while also throwing a shitload of shade. “A stuffed head or a pair of antlers is no replacement for the trophies that Bonds hasn’t been able to win since his doping scandal,” PETA states.

Many fans expressed a similar sentiment, choosing to sidestep the whole “Bonds killed a giant animal with a bow” thing and instead focus on his MLB record-setting 762 home runs; a feat that was mired in controversy following a federal doping investigation that linked the star athlete with BALCO.

Whether you like Bonds’ off-the-field conduct or not certainly doesn’t make much of a difference, unless you’re Ichiro Suzuki. The beloved outfielder is his pick to be Home Run Derby king, fueling a popular conspiracy theory that Suzuki’s always been a power hitter but just never gave enough of a shit to show off.