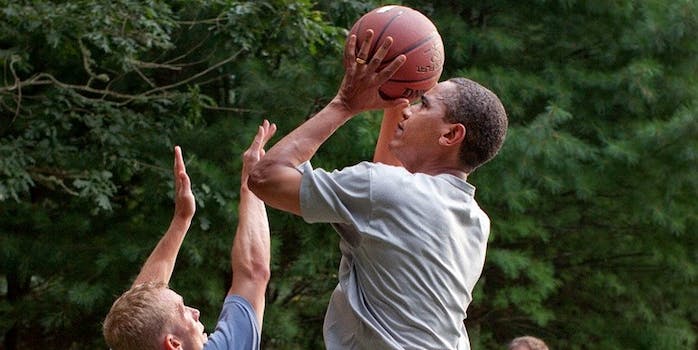 With only about a year left on his second term as president, Barack Obama, at some point, will have to figure out what he’s going to do with his life post-politics. A suggestion: How about getting back into sports and making a concerted effort at remaking himself as the solid basketball player he once was?

That’s what SB Nation writer Tom Ziller would like to see once Obama returns to public life. In fact, Ziller created a White House petition that would place Obama in the 2017 NBA All-Star Celebrity Game.

As Ziller writes on the description:

The 2017 NBA All-Star Celebrity Game will be held on February 17, 2017 in Charlotte, North Carolina. As of the publishing of this petition, former Education Secretary Arne Duncan holds the record for most points scored in a Celebrity Game with 20.

With all due respect, this is a soft record. President Obama will have a month out of office to train for the game, and there’s no question he can destroy Mr. Duncan’s record and the will of the opposing team.

This is your chance to finally make history, Mr. Obama. Seize it.

The petition was created Thursday, and as of 1pm CT, 397 people have signed it (meaning only 99,603 more signatures are needed to force a response from the White House).

But it might be tough to lure Obama back onto the court in a full-time manner. As longtime NBA writer Alexander Wolff told the Wall Street Journal, Obama hasn’t played in high-level games regularly since 2010 when he suffered a bloody lip that needed 12 stitches to close.

Also, at the age of 54, Obama most likely wouldn’t be the star for whichever team he competes.

“He hates being a weak link,” Wolff told the newspaper. “The irony of that is he has pretty consistently been the least accomplished player on the court, but he always found a way to fit in, figured out whose hands to get the ball into… The bloody lip happened the Friday after Thanksgiving and he had just scored and went to play tight defense. His opponent did that natural thing players do when someone is in tight. He showed the ball and swung it left to right. Obama was right up in his grill and got the elbow. He was crowding his space and probably being annoying on defense, but maybe that is presidential prerogative.”

So, this petition, even if does get the 100,000 signatures it needs to garner a response, seems destined not to succeed. But it’s a good try. And hey, at least we didn’t get another petition asking Obama to drink his own piss.