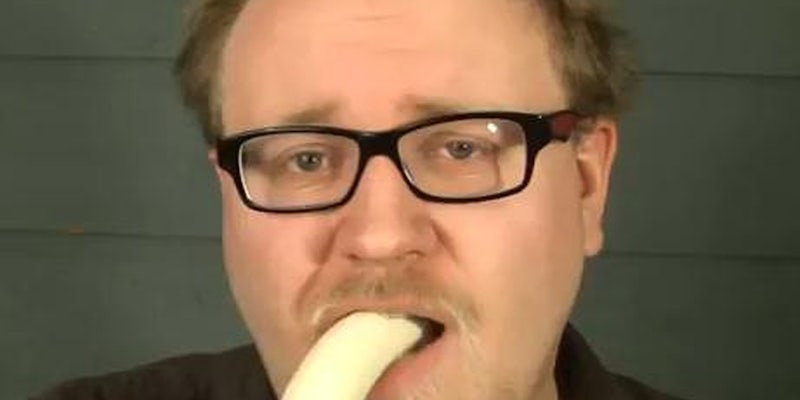 Tell me if you've heard this one: A man walks into a banana ...

Anthony Weiner and Robert Arango could learn some lessons on damage control from the Amazing Atheist.

Unlike those disgraced politicians, Terroja Kincaid, who also goes by “TJ” but is better known on YouTube as the Amazing Atheist, has survived the leak of embarrassing visual documentation of his raunchy side.

In a video that’s far less appetizing than it might sound, Kincaid covers himself with chocolate syrup and coffee and engages in an intimate act with a banana. (The orifice in question is not his mouth.) Kincaid had sent the video to a couple lady friends. From there, it hit the Internet.

It could have ended badly. But Kincaid’s response, combined with the goodwill he’d built up from his engagement with fellow members of the YouTube community, made all the difference.

Members of 4chan, an image board known affectionately as the “asshole of the Internet,” discovered the video last night. They proceeded to “raid” him, flooding Kincaid’s YouTube channel and his Facebook page with screenshots from the video, rude messages, and more. They uploaded videos about the Amazing Atheist and his banana. (Unlike the original video, these commentaries are safe for work, and among the least insulting to result from 4chan’s raid.)

Once Kincaid learned of the leak, he reacted with lightning speed, uploading a video titled “BANANAGATE 2011” last night addressing the incident.

“The things that I did, I did because I enjoy them,” Kincaid said. “I wasn’t ashamed of them when I was doing them in private, I see no reason to be ashamed of them now that they’ve been made public.” He ate a banana while making the video.

“My fans are pretty cool, they’re not going to judge me for this shit… I mean, what reputation is this exactly supposed to tarnish? …  I mean, let’s face it here, I am, and always have been, a fucking weirdo…. 90% of you, if you really thought about it, would have been able to figure out that I was doing some weird shit like this in my spare time in the first place.”

Other YouTubers took to vlogging about the experience. One fellow YouTuber, the Archfiend, defended Kincaid, saying “this wasn’t like Barack Obama … this was just some guy who makes videos on the Internet.”

4channers promptly stopped bombarding Kincaid’s outposts on the Web. When other 4channers wondered why the raid was over, the explanation given was that Kincaid didn’t seem to care and wasn’t ashamed. Or as one wrote:

Since Kincaid uploaded the video defending himself, his fans have taken to leaving encouraging messages on his Facebook page.

Geoff Phoenix wrote that Kincaid “handled this fantastic situation wonderfully.” Dominick Archer commented “Your response to the incident swelled my respect for you.”

Since Bananagate, the Amazing Atheist’s subscriber count has steadily increased, as Kincaid noted on his Tumblr.