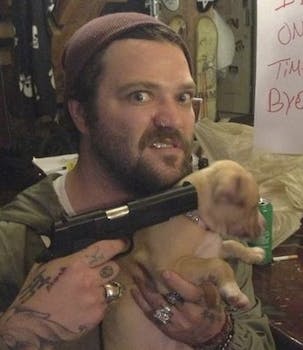 The gun in Bam Margera's Twitter photo was fake, but the outrage he caused was very real.

Jackass star Bam Margera has apologized for his latest prank, which even he admitted was out of line.

In a series of tweeted photos, the 33-year-old threatened several friends, a cat, and a pit bull puppy by thrusting a toy gun against their heads. It was only the photo of the puppy that Margera decided to apologize for.

“Penny pooped in my bed. Not too fond of that. If it happens again, Penny goes Bye Byes!”

Apparently, news travels fast when you have 8,000 followers. Margera posted the tweet on Oct. 4 and received public condemnation from local animal activists the same day.

“Animal lovers are not happy with the recent gun-toting pictures he has posted on his account,” Fox29 reported.

“Watch fox news at 10 @BAM__MARGERA just did an interview for the dog and cat bye bye pictures we posted,” @Production13, a friend of Margera’s, tweeted with a photo of the interview set on Oct. 4.

In the interview, Margera said he’d only been joking, and thought followers understood that.

“I feel like every follower I have on Twitter knows my Jackass joking kind of humor,” he told the Philadelphia Inquirer.

He may be right; in the aftermath of the incident he said he has gained 30,000 new followers.

He also said the eight-week-old puppy, since renamed Sunny, is being crate trained to prevent any more bed-pooping incidents.