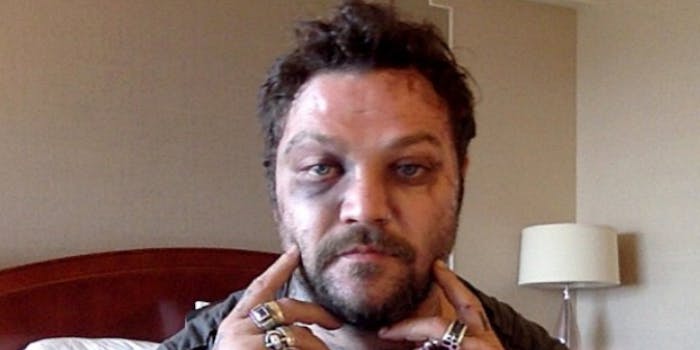 Bam Margera should be used to taking plenty of hits to the face.

What do you get when you mix one of the biggest stars from Jackass with a popular Icelandic rap group, and you shake it all together at an overseas music festival? You get Bam Margera apparently taking a beating.

Visir first reported that Glacier Mafia got into a fight with Margera at the Secret Solstice Festival in Iceland last weekend. You’ll probably want to read more, so here’s how Vice explains the incident:

Bam Margera was said to have been harassing the female security guards there. The Glacier Mafia noticed and took revenge. Every artist and crew member at the Secret Solstice I asked about the incident seemed to agree on one thing: Bam Margera was being a jackass. Speaker Ósk Gunnarsdóttir from the festival said that Bam was “in a strange condition” and tried to enter a production area. Two female employees tried to stop him, it got an [sic] little bit rough, and rapper Pálmi and his crew intervened.

Here’s what the fight looked like (Margera is wearing the black coat with the red insignia on the back).

But Margera—who apparently spends plenty of his time in the country and who got married in Reykjavik—has a different take. In the video above while speaking to Visir News, Margera said the fight had nothing to do with the Secret Solstice Festival or a female worker. Instead, Margera points the finger at festival organizer Leon Hill—a publicist who used to work with Margera and who Margera now calls a “scumbag”—and said he got beaten up by the Icelandic rappers on Hill’s order.

In boston out of the hospital, now off to see my lawyer! Iceland kids, your getting a skatepark, a proper one.