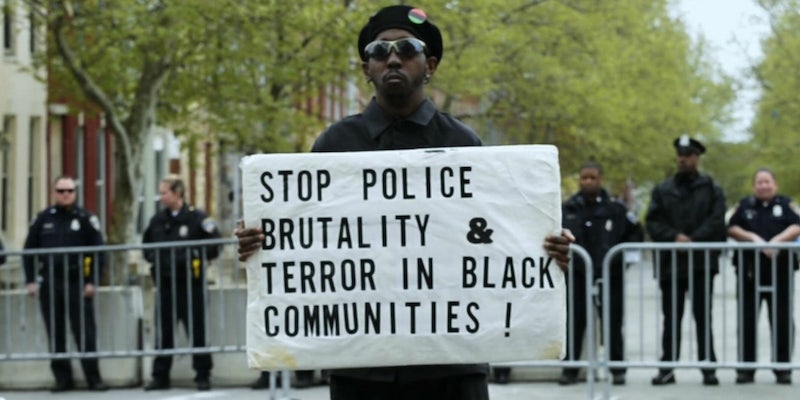 There are no easy answers when Baltimore tells its story.

Baltimore Rising takes us back to the tumultuous spring in 2015 after the death of 25-year-old Freddie Gray, who died in police custody after his spine was mysteriously broken. In 90 minutes, the HBO film unpacks the societal response to his death. It was a tipping point.

In 2012, it started with Trayvon Martin. In 2014, it was Michael Brown and Tamir Rice. In 2015, it was Sandra Bland less than two months before Gray. These highly publicized officer-involved deaths of Black people become the rallying cry for the activists introduced in the documentary.

The film opens with riots raging in the streets as protesters demand the city to address the lack of education, socioeconomic opportunities, and rampant history of police brutality. These small incidents are what the film centers around as it explores the deep fissures of a city that has historically been plagued by racial segregation.

The sentiments are best encompassed in one resident’s remark: “Stop trying to make us scared of ISIS instead of our own judicial system because that’s our terror in our community.”

As Baltimore Police Lt. Col. Melvin Russell says in director Sonja Sohn’s film, his death was “that last straw that broke the camel’s back after decades of crying out.”

Sohn, best known from her role on The Wire, takes us all over Maryland—from city hall proceedings to a mural for Gray, and various neighborhoods that give us a pulse of the fear residents are feeling.

One palpable thought guides the protesters who refuse to back down, despite the eventual costs that organizing protests have on their lives: What’s next? An ensemble of individuals helps us find out. Former gang affiliate Genard “Shadow” Barr is the standout. He works as a substance abuse advocate who repurposes the burgeoning Black Lives Matter movement to work with the kids.

We see that future generation embodied in 17-year-old high school student Makayla Gilliam-Price whose educational aspirations fall to the wayside as the teen becomes enraptured by the social movement. We also see how constant activism can wear on a family through 21-year-old Kwame Rose who first loses his job after a video of him ranting at Fox News’s Geraldo Rivera goes viral.

Emboldened, Rose is constantly toeing the line with law enforcement. The audience is meant to question whether his efforts are worth the toll.

Gray’s family is mostly absent save from a brief interview with his stepfather. Sohn uses the community at large to mourn him, and seek answers. As such the film becomes frustrating: We’re only given cursory nods to the city officials actually working to address these cries for change, and no concrete solutions.

The documentary’s greatest virtue is the wide range of emotions we see from a community low on hope but adamant to see change. The imagery is vivid and moving. But the film misses the mark with its aimless narrative.

Newly appointed Police Commissioner Kevin Davis holds a series of meetings with activists and residents where we see him almost brought to tears by Barr’s account of public injustice. But it just serves to highlight the futility of the situation: Later we see Detective Dawnyell Taylor, a lead investigator on the Gray case, gleefully rejoice after her partners are acquitted for their roles in Gray’s death.

Throughout Baltimore Rising, many people make big declarations but we don’t ever see the consequences brought about by their eventual inaction.

Despite these shortcomings, the film is a necessary in-depth look into activism, social injustice, and the act of trying to heal after a tragedy.