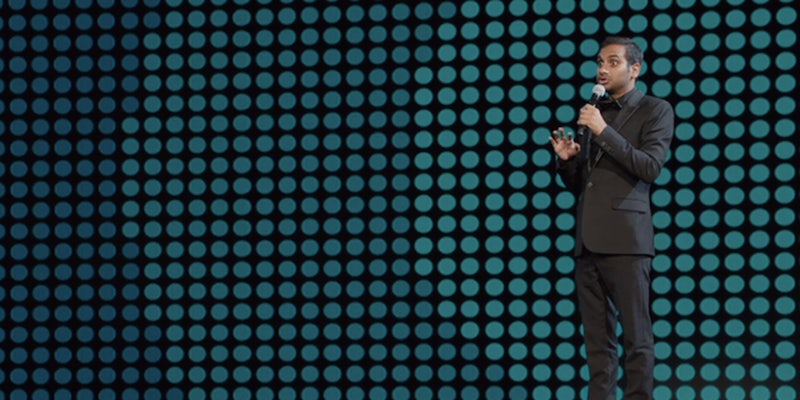 Not many comedians make it to Madison Square Garden.

Aziz Ansari’s second Netflix-exclusive release, Live at Madison Square Garden, finds the comedian on stage at a sold-out show in the same venue where the Rolling Stones and Marilyn Monroe bookmarked history. Not many comedians make it to that stage, and Ansari hardly seems to believe it himself.

Ansari eases us in with a bit of perspective: He speaks of being a first-generation American whose parents moved to South Carolina from India, and relates that when his mom spoke of their struggle to transition, he responded, “My life is super easy because you did all the struggling!” Ansari also seamlessly connects a bit about Ja Rule and the meat industry.

He succeeds when he plays sociologist, as his bit about male vs. female street harassment attests. But the joke’s pretty obvious there: Of course men don’t experience harassment like women do. He goes deeper on our collective narcissism (“If you’re alive right now and you have a phone, you’re a rude, shitty person”), dating in the age of the text (you’re a “secretary for a really shoddy organization, scheduling the dumbest shit for the flakiest people ever”), and laments that, in terms of dating, we always want the best but pretend to be “busy forever” to avoid meaningful connections.

Some of his relationship bits are a little too but whyyyy, and perhaps Parks and Recreation‘s Tom Haverford is more like Ansari than we know. His swag obsession certainly informed his earlier specials. This might all be bits of observation culled from writing a book about romance.

His elastic personality and trademark vocal stretches sustain the energy needed for a comic to command MSG. They’re part of his persona and part of the dynaaaamiiiics of an Ansari show.

In the last year, Netflix released a handful of standup specials exclusive to the site, including Chelsea Handler, Chelsea Peretti, and Bill Burr. May sees a Netflix standup release from Jen Kirkman. This focus on standup specials is interesting, and points to a desire to make standup as accessible as their original series. Ansari is the perfect match for them.

His dynamics carry the last segment about marriage and the encore includes another bit about relationships, but his delivery never feels too heavy-handed. To bring this chapter back full circle, Ansari asks his parents to come on stage at the end. The three hug and gaze out at a sold-out Madison Square Garden. Perhaps it was another way of saying thanks.