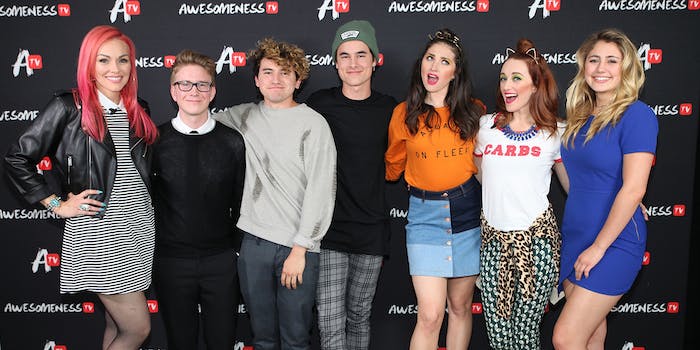 Forget millennials, AwesomenessTV is out to serve Generation Z

The tween and teen-focused multi-channel network AwesomenessTV outlined its dominance with the 12-24 set at its NewFronts presentation this week. To do so it brought out some of the company’s biggest stars, from Jc Caylen and Kian Lawley, to Kandee Johnson and Tyler Oakley, to explain how Awesomeness programming connects with its targets.

“This is really a whole different sort of mass media,” explained Oakley. “I reach millions of people, but they feel like they’re being reached as individuals.”

Said founder Brian Robbins: “Gen Z, they are rich. … They are loaded man.”

He went on to explain how they are flush with parental money, free from college debt, and all have smart phones, which he described as “basically credit cards.” All that combines for the perfect storm of a consumer.

“They’re the most influential generation ever,” he said.

There is some wiggle room in AwesomenessTV’s focus on the Generation Z crowd. To skew younger, DreamWorksTV creates content for children. Actual child star Sunny Keller took the stage to explain how DreamWorksTV has produced more than 100 original series for 1.5 million subscribers in two years, eclipsing established kid brands like Nickelodeon and Disney.

For millennials, AwesomenessTV has honed in on a subset: the millennial mom. Awestruck, AwesomenessTV’s new programming offering for the growing millennial parenting genre, features digital star moms like Kandee Johnson and mainstream celebs like Zoe Saldana.

The company also announced a partnership with Major League Baseball for a multi-episode scripted series aimed at bringing young viewers to the sport, as well as new seasons for Royal Crush and Guidance, and a new go90 series, [email protected]. Another announcement was the Kids Game Awards, a new livestreamed program from DreamWorksTV to highlight the best in kids gaming this October.

AwesomenessTV is also moving into the messaging space, partnering with Kik to deliver chat bots on the platform. With an audience of 40 percent of U.S. teens, AwesomenessTV will tailor unique, scripted content directly to handheld devices.

AwesomenessTV content is now available on 31 platforms, including a recent Apple TV launch.

“The problem with linear TV isn’t the shows, it’s the experience,” said Robbins, who started AwesomenessTV at his kitchen table four years ago. “Today we’ve evolved into an IP-driven network.”