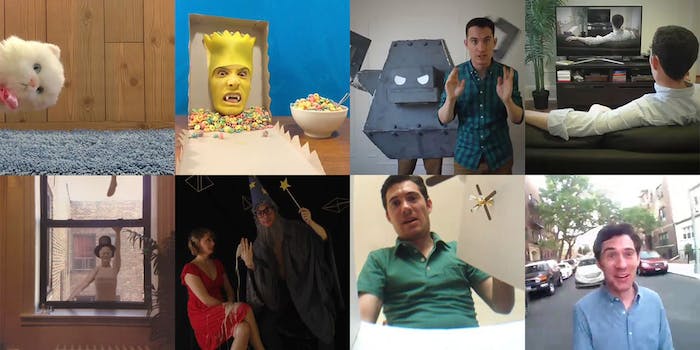 Get stuck in a loop with Vine’s Avery Monsen

You'll be happy to get stuck in a loop with this guy.

One of Avery Monsen’s best vines only contains two words: “hello” and “hey.” It’s what happens around those words that nails exactly what Vine is good for. You get stuck in a loop with him.

The L.A.-based Monsen’s also a member of the Upright Citizens Brigade Theatre, has appeared on 30 Rock, and co-authored All My Friends Are Dead, a very dark kids’ book for misanthropic adults. He’s currently involved with a Kickstarter project to create an emoji Ouija board, a logical conclusion to creating 100 new emoji, which, sadly, have not been adopted into the traditional emoji template. Most recently, Monsen has been making vines for SundanceTV and finding creative ways to highlight their programming.

“They’ve been great to work with,” he told the Daily Dot. “I was hesitant at first to make any sponsored Vines, but then I saw that they’d let me do the same weird stuff that I do already. Also, I’m poor and it’s hard to say no to people offering you money for silly little videos.”

We asked Monsen a bit more about his process, whether repetition is funny, and the mental anguish of creating 100 new emoji.

Are you able to actually make money off Vine?

There’s probably only a handful of people who are making money from Vine. They’re dreamy-eyed teens who shout a lot. They will spend their money on board shorts. But there’s also a bunch of people who, like me, are freelance artists and animators making a living by cobbling together little jobs here and there. I make my living from book royalties, acting gigs, writing projects, and Vines. I try to stay busy.

What’s your process with Vine? How many ideas get nixed?

I have a note-taking app on my phone where I jot down any little half-ideas that pop into my head. I have no idea how many get nixed, because they usually just get shuffled around, combined, or turned into other things. Sometimes they end up as tweets. Other times they are unusable garbage.

Is there something about the format that lends itself to comedy, specifically in terms of repetition?

I think there’s something great about getting to watch something funny over and over as many times as you want. On the other hand, a looping unfunny thing is brutal. Thus is the nature of duality. Good loops, bad loops. Namaste.

Do you think good comedy includes an element of being a little uncomfortable?

Hmm. I don’t think all good comedy requires discomfort. Nor do I think everything uncomfortable is necessarily funny. But there’s a pretty big overlap in the funny/uncomfortable Venn Diagram. Humor usually comes from a break in expectations—a violation of how things “should be”—and so does discomfort, so the two often come hand-in-hand? I will be thinking about better ways I could have answered this question for weeks.

I watched this Vine at least a dozen times. Where did this idea come from?

It was a while ago, but I’ll try to recreate my train of thought: First, this scene is hilarious. Anything with men being overcome with emotion is funny to me. Plus, it has looping dialogue. Robin Williams and Matt Damon basically say, “It’s not your fault, son” and “I know” over and over until Matt cries. That’s perfect for a Vine loop. OK, cool, I’ll do something with this scene. It’s really emotional and well-acted; what’s the best way to highlight that? Re-enact it with computers who are unable to feel. Boom! Vine!

I feel like you’ve nailed what Vines are supposed to be, but then I look at the “Popular Now” page and see a bunch of teenage boys braying at each other. Who are people on Vine you think are doing it right?

Thanks! Vine is a tricky place. For better or worse, the app has lots of teenage users, which means the most popular stuff tends to be very loud and very broad. Lots of pranking and scaring and slapping. Lots of “white people dance like this, black people dance like this.” Lots of board shorts. That’s all fine, but it’s not really what I’m into. But, if you look around, you can find people doing cool, weird stuff too. Simply Silvio, keelayjams, Karen Tozzi, Alicia Herber, and Tom Shea are all great. Follow them for good feelings in your eyes and brain.

Can you tell me about your involvement in this [Emouija board] project? Why do you think emojis have become so culturally accepted?

My buddies Taylor Moore and Ryan Williams—both hilarious comedians that I met at the Upright Citizens Brigade Theater—came to me with the idea of an Emoji Ouija (“Emouija”) Board. They knew that I had experience with fake emojis so they asked if I wanted to help. I think the project is not only funny, but important. Modern ghosts don’t have time to spell out their messages on old fashioned Ouija boards. If we want to talk to today’s ghosts, we need to speak their language: emoji.

How long did your 100 new emojis Vine take to put together? Were those ideas you were saving up over time?

Oh, I wish I had them saved up. No, I had the idea, wrote, and illustrated them all over the course of three terrible days. I didn’t shower; I barely ate. I just wrote and drew emojis. After about 85, I almost gave up. But then I asked my UCB sketch team, Beige, for suggestions, and that pushed me up to 100. If anyone reading this is considering making 100 fake emojis, I urge you to reconsider. 100 is too many. There’s no reason to do that to yourself.

What currently resides in your “recently used” emojis?

I’m a smiling red ogre kind of guy. I use that to answer almost everything.