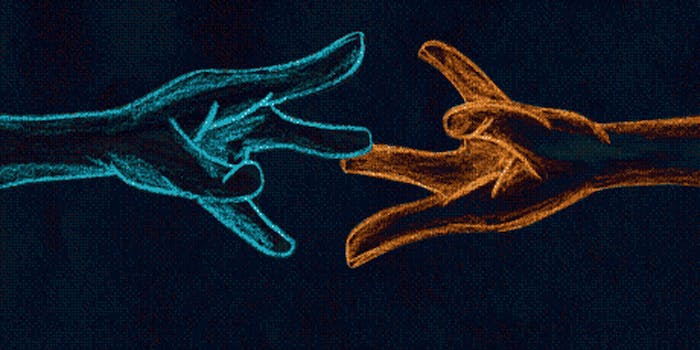 Documenting life, 1 GIF at a time

Animator Mark Estrada has been transforming life's good, bad, and weird moments into hand-drawn GIFs on his Tumblr.

Just ask 26-year-old animator Mark Estrada, a recent graduate from the University of Texas at Austin who has been transforming life’s good, bad, and weird moments into hand-drawn GIFs on his six-month-old Tumblr blog, AUTOBIOGIFICAL.

“‘Mustering’ pretty accurately captures my trouble with approaching women,” Estrada, who uses Photoshop, Flash, and AfterEffect for his animations, told the Daily Dot.

“‘Meanwhile, in first grade‘ did actually happen to me and looking back on it, I can’t help but laugh that six-year-old me inadvertently flustered that bully.”

“‘Vision and Talent‘ is not based on a specific event, but rather a general mood about how I feel time to time about my own work. Because of that, I think it is a bit more poignant that a lot of the others.”

Estrada has also drawn inspiration for his blog from illustrator Austin Kleon and cartoonist Hugh MacLeod, the former teaching him to find a routine, while the latter has encouraged him to push his limits.

“If I can make a person laugh when I intended them to laugh, or make them feel a little sad when I was going through a tough spot, I’ll be satisfied,” he said. “I have no idea what will resonate with people. At the same time, I can’t be too precious about these pieces and what others think.

“This blog also functions as a means of therapy and a way for me to get a better understanding about my life. I welcome positive and negative critiques, but at the moment, I kind of just want to put on blinders and push forward.”