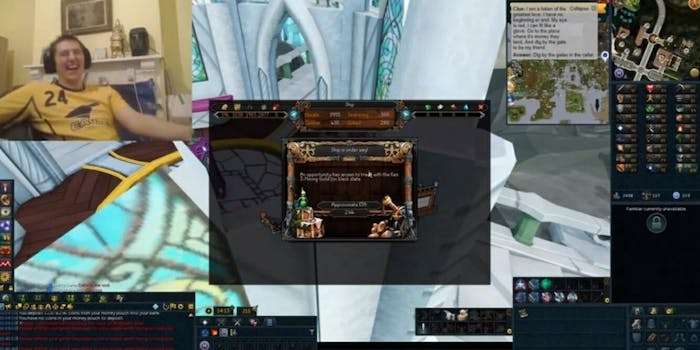 Twitch user banned after telling woman to ‘kill yourself’ during stream

The Twitch channel of a streamer named Aus_Swag has disappeared after he broadcast himself telling a woman to kill herself.

The incident happened this past weekend when he was in a stream. A female voice on his Discord call said, “So, call her and be like, ‘I know you’re having a hard time at the moment. I gave you the number. If you’re really suicidal, I cannot help you. We’re friends, and I should not having to be to dealing with this.’”

Aus_Swag placed the call, the woman answered the phone, and he said, “I think you should just kill yourself honestly.”

Many on the stream then broke out into peals of laughter, and Aus_Swag fell out of his chair in hysteria. In the melee, somebody said, “That can get you sent to jail, dude.” Somebody else said, “You’re getting banned.”

Not many others found the stunt funny, and he’s been banned from Twitch.

According to RuneScape, an online-role playing game, he’s also been banned from playing.

“The RuneScape player is not someone with whom Jagex has—or ever had—a business relationship but given the incredibly serious nature of the incident we have taken measures that make it clear such behavior will not be tolerated,” a statement found on the Runescape forum read. “As a result, the individual has had their RuneScape account permanently banned with immediate effect. Jagex is incredibly passionate about mental health and wellbeing, and we will continue to do all we can to help those in our community—and beyond—receive the support they need to overcome the mental health challenges they face in their day-to-day lives.”

According to the streamer, this was supposed to be a joke. On his supposed Twitter account, Aus_Swag apologized but said the microphone was actually muted when he called the woman, so she never heard him tell her to kill herself.

He also uploaded a YouTube video in which he recorded himself calling back the woman and asking if she heard him tell her to commit suicide. On the video below, she said no though she also said he had been acting strange.

“In reality, it isn’t something to joke or laugh about, and the actions of myself and the people who were in the Discord call were reprehensible and not a true representation of my community,” Aus_Swag wrote on Twitter.