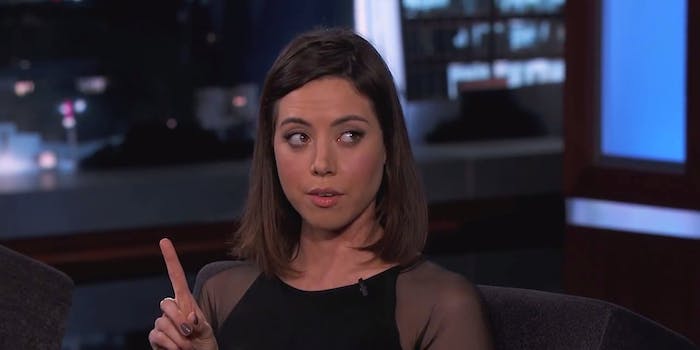 This is all your fault, America.

Let’s face it: The Grumpy Cat Christmas movie from Lifetime is probably going to be terrible. Nobody knows this more than the actress trying to convince you to watch it.

At first, Aubrey Plaza voicing Grumpy Cat seemed to be dream casting. The expectation was that she’d bring the sort of deadpan annoyance she nails on Parks and Recreation to the role of the Internet’s favorite angry feline. Yet even Plaza can’t seem to disguise the fact that the film will be disappointing—that it will, in other words, just be a LIfetime movie starring an Internet meme.

Plaza still has to sell the film, of course, and in an appearance on Jimmy Kimmel Live, she tried to convince the audience that the Grumpy Cat movie was something worth checking out—after you’ve had a few glasses of wine.

“It’s really, I think, the most insane thing I’ve ever seen,” she told Jimmy Kimmel. “Ever seen on page and ever seen come to life.”

Even more insane might just be imagining Grumpy Cat, whose real name is Tardar Sauce, with an actual entourage on the day Plaza actually got to meet the cat.

YO GRUMPY HEADS! FIND OUT MORE INFO AT https://t.co/XTRDjgO7Ms #WHY pic.twitter.com/lH6OnnEKVq

“It’s a gift to America,” Plaza said. Yet another reason to blame America for the world’s woes.