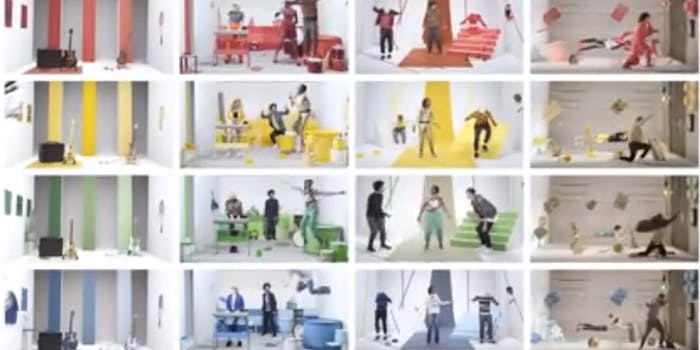 ASOS joins the ranks of interactive video ads on YouTube

Ads are more fun when you get to play with them.

For anyone who watches a large amount of YouTube videos, ad content is usually the pill you have to swallow before you get to the good stuff. But sometimes ads themselves can do well on YouTube, and one trick advertisers have fallen back on is creative interactive experiences that make ads something to play with instead of just something to tolerate.

ASOS recently released a brand ad that allows users to toggle between different colors as a band performs using an annotated color bar across the top and bottom of the video. This same Choose Your Own Adventure-style tactic of using annotations to hop around a single upload has been used for other narrative purposes, including a recent haunted house video shot at YouTube Space L.A. But that video has celebrities and a plot, where ASOS just has colors and music to keep you interested in jumping around.

The ASOS ad works because flipping through different colors is similar to shopping for new clothes and styles. The concept remains the same between colors, but the styles and actions change. If you let the entire 4:35 video run it shows all the colors, but you can remix them into your own 56-second experience.

There are also more high-end iterations of the same concept, keeping the idea that you can flip-flop between visual experiences that continues a narrative. Music videos have often experimented in this space, with the biggest splash coming from Bob Dylan’s interactive channel-changing experience in 2013. Brands are no strangers to hyper-customizing their interactive ads as well. Honda currently has an interactive ad on YouTube that allows you to hold down a single key to see two simultaneous stories of one man driving Hondas, called Other Side.

Sure, these interactive ads are still selling you something, but it’s much more fun to get to play with a video that’s selling you something than just watch it passively, and as YouTube and video technology advance, we’ll likely see more of these playful ads hitting the video landscape.