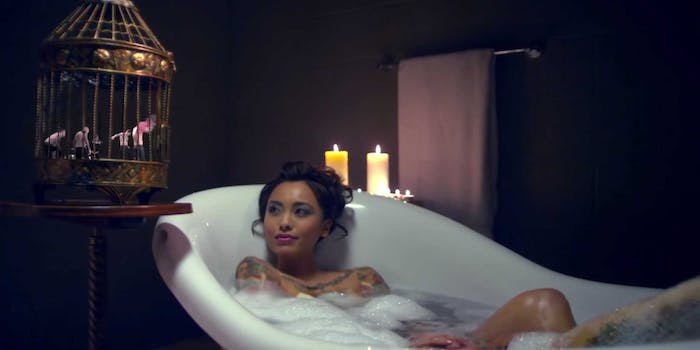 “Asian Girlz” is even more racist than it sounds

We might have a winner for the most racist song of the summer.

We might have a winner for the most racist song of the summer.

Joe Anselm and Drew Drumm spend a full minute just naming different typical Asian food and pop culture, Asian towns in Southern California, and a chorus of “ra ra ra’s,” and the song also features other choice lyrics such as “I love your creamy yellow thighs / Ooh your slanted eyes” and “It’s the Year of the Dragon / Ninja pussy I’m stabbin’.”

The band took the video down after people complained in the comment section, but they put it back up with a new video description.

“Our song ‘Asian Girlz’ was not written with any malicious, hateful, or hurtful intent,” the band wrote. “We know it is racy and does push the boundaries further than other songs out there. Understand that we do not promote or support racism or violence.”

However, nobody’s buying their apology. The video is overwhelmed with dislikes and comments calling the band racist. And people are now attacking Tran online for agreeing to be in the video in the first place and accusing her of “selling out.”

She, in part, apologized for her participation in the video and defended Day Above Ground.

I sincerely apologize to all who feels that I set Asian women back 50 yrs. I know I lost respect from a lot of ppl. It wasn’t my intention

It was meant to be light hearted and fun. Satirical. They are sweet boys and not at all racist. That is all I will say. I’m sorry once again