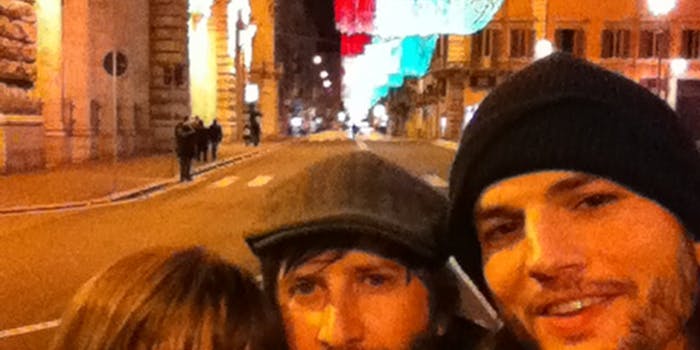 A naughty check-in has the "Two and a Half Men" star on the hunt for the person who allegedly broke into his Foursquare account.

Ashton Kutcher, the actor, is a voracious consumer of new technology, and dabbles in investing. He’s got 9 million followers on Twitter and has backed hot startups like Foursquare, the location-based social network. But that doesn’t make him invulnerable to hackers—if anything, it makes him a target.

That’s what his Twitter followers learned Sunday night after a tweet appeared claiming that Kutcher was sleeping over at “Lorene’s House” and mentioned the Twitter account of Lorene Scafaria, a screenwriter and actress with whom Kutcher vacationed in Italy over the holidays.

People instantly tweeted “TMI”—or in some cases, not enough information, asking when Kutcher was going to invite them over for breakfast. Others made reference to Kutcher’s pending divorce to actress Demi Moore, who still goes by @mrskutcher on Twitter.

The indiscreet tweet was uncharacteristic of Kutcher, who vowed to have colleagues screen his tweets after he shot his mouth off about Penn State coach Joe Paterno last November. Kutcher promptly declared he’d been hacked and deleted the tweet.

It’s possible, of course, that Kutcher was pulling a Weiner, using a made-up hacker as an excuse. But he claimed that the hacker had left tell-tale details of his or her own location in the process of breaking into Kutcher’s account.

Maybe this is a good reason for Kutcher to join his ex in spending time on Path, a more-private mobile social network.

Here’s how the hack unfolded, and how Kutcher and Scafaria cleaned up afterwards: