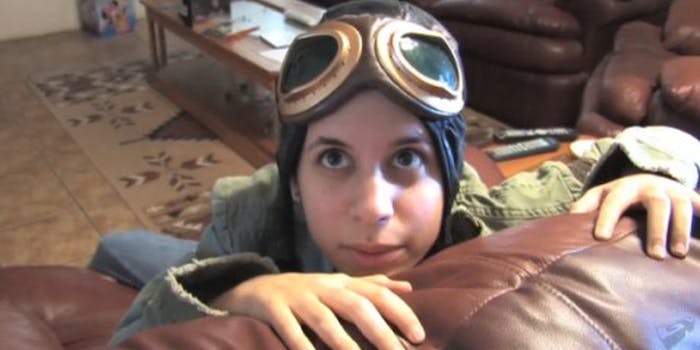 One gamer is out to show the world video games can be good for your health.

Viral video star Ashly Burch wants Tumblr to know that video games can be good for you.

Burch is well known on YouTube and Gametrailers as the silly, energetic game reviewer on Hey Ash Whatcha Playin (HAWP), a web series she’s filmed with her brother. However, Burch wrote on her Tumblr, she once struggled with anxiety.

Burch wrote about how playing Harvest Moon helped her overcome anxiety and her resultant stomach problems.

“All I know is that it was seemingly the only thing that helped soothe me, and I like to imagine that, without it, my stomach would have suffered much more than it did,” she said.

She ended the post with a request to readers: “Has a gaming experience helped you through a difficult time?”

The response, she wrote on the HAWP blog, was incredible. This week, she started How Games Saved My Life, a Tumblr to record all the “awesome testimonials” she recieved.

“I still have this nagging feeling, my mom’s voice in my head telling me video games are a waste of time, but look at it this way: if I didn’t have video games to get lost in, I would be stressed out, angry and bald,” one submitter wrote.

The Tumblr’s secondary title is “testimonials about the positive, life-changing power of video games,” seemingly a jab at the way video games are frequently portrayed. It’s easy to find a news story about video games as negative influence, but rarely one about their positivity.

“People that think games are bullshit need look no further than the awesome, inspiring posts you all sent me,” Burch wrote about the launch.

Burch could not be reached for comment. She’s at PAX, a Seattle gaming summit, promoting her web series. While she’s gone, Tumblr users continue to share and reblog the posts.

Video games may have saved Burch, but she, and the community behind her Tumblr blog, are helping to save others.