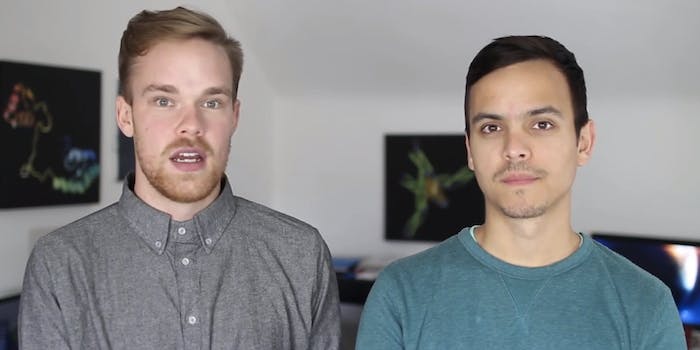 Prominent YouTubers call out the platform’s problem with privilege

Why are the top content creators all white, cisgendered men?

The (white, cisgendered) guys behind AsapTHOUGHT and AsapSCIENCE think so, and they took to their channel to call out the privilege of many YouTube creators with a provocative new video this week. They go through Peggy McIntosh’s Privilege Checklist, applying it to themselves and asking viewers who might fall into these privileged categories to be aware of their unique position.

“To be honest, it’s hard to keep going to these events and not seeing enough diversity or women on the panels and in positions of power,” Gregory Brown, one half of the duo, says in the video. “If YouTube itself and YouTube events had mandates that ensured that other diverse voices were heard, it would inspire a new generation of YouTubers to feel represented and passionate.”

As we’ve noted before, at major events like VidCon, there’s a stark contrast in the number of female creators versus male creators that attain the highest level of notoriety, and many of those female creators are part of female-dominated spaces like beauty and fashion, while men enjoy a broader range of topics. Likewise, diversity panels draw more heterogenous crowds of both attendees and panelists, but that same breakdown isn’t visible across all panels or positions of power.

YouTube is a space where anyone has an entry point to become a creator, and through the community, anyone with a voice can rise among the ranks, so it’s important that the AsapTHOUGHT guys push their own viewers to think about the systems in place that privilege the same people on YouTube that receive privilege in other media. That’s the first step to fighting against it.