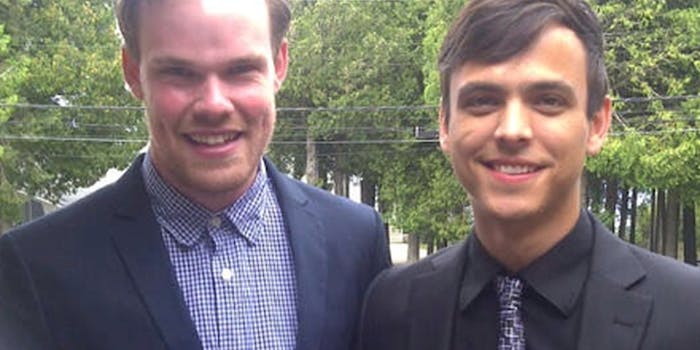 Through white board presentations and scholarly research, Mitchell Moffit and Gregory Brown crack the science of orgasms, hangovers, and naps.

Reading, writing, arithmetic. Those are the things that make kids sick. But what about science? Two guys in Canada may have actually found a way to make the subject entertaining for kids of all ages.

Mitchell Moffit and Gregory Brown are the two former University of Guelph classmates behind asapSCIENCE, a young but massively informative and entertaining YouTube channel that produces three-minute lessons on all the scientific questions that you actually want answered: “The Scientific Power of Naps.” Check. “Amazing Facts to Blow Your Mind.” Gimme. “What causes a Hangover?” Now, this I’ve got to know. “The Scientific Hangover Cure.” Yes sir, even more so.

“We’re trying to keep a balance of the things that people want to know as well as cool tidbits that people would never have any idea about,” Moffit, 23, told the Daily Dot from his home in Ontario, where he holds down production and most video voiceovers while Brown spends the year teaching science in England. “It’s easy for somebody to say they want to know about diets, but they would never ask, ‘How come your blood acts this way when you go out to high altitudes?'”

The two excel at bringing logic, reason, and, well, scientific evidence to the most common of questions, the ones that everybody’s asking and no one’s actually answering.

“We’re interested in inspiring people who maybe don’t know a lot about science and think of it as this hard subject in school,” Moffit said.

“Hopefully they’ll realize that [science] can be kind of cool, that they can follow that field or at least spend more time with it. There are lots of details that you can get lost in once you get really involved, but there are lots of interesting and awesome things as well.”

The perfect example’s “The Science of Orgasms,” which more than 380,000 people have viewed in the past week and comes packed with far more knowledge and insight than the time your dad tried to put a condom on a cucumber. The asapSCIENCE guys have only been making these videos for three months, and they’ve already racked up more than 40,000 subscribers and 2.8 million views.

“It just sort of blew up,” Moffit said. “We thought we’d just put up a few videos and then start promoting it once it goes its bases, but it picked up well before that. People were sharing it, and it was so encouraging that people were enthusiastic about learning and asking questions.

“It’s grown such that there’s now this community where other people are also asking questions and helping answer things that people want to know on the videos themselves.”

All of that attention has come in the name of science, and most, believe it or not, have been from teenagers and young adults, some of whom—myself included—likely lamented those labs and life sciences in school. Moffit said the difference in attention has as much to do with discourse as it does with design. Their method of teaching is by asking their students (né viewers) what they’d like to learn.

“Some videos could not be very captivating and have trouble holding the audience, but on YouTube, you can share interesting information in an entertaining way. People want that, and that brings people into the conversation. They feel like they’re a part of it. The difference between television and YouTube is that people can comment on the videos and voice their opinions on questions. We’re not the only ones participating. It’s not a one-way street.”

The two produce videos on a weekly cycle, with research paving the way for a three-minute first script and a rough draft on the video’s design. “Once it’s semi-set,” production becomes a matter of rigging a tripod and camera a few feet from a white board and drawing out a meticulous, orderly plot line.

Moffit said that the actual filming’s the easy part. What’s tough is establishing what’s true, especially when the topic’s not common knowledge. The two limit their research to peer-review studies and journals to make sure the story’s straight.

“You research so much more than you actually use,” Moffit said. “You have this breadth of knowledge and wonder ‘How on Earth am I going to keep some bits and cut some bits but not have people think that things were cut out?’ It’s fun, and it’s a cool process to make a lesson.

“We’re constantly looking through papers, consulting journals, and learning about things that people are discovering. It makes me want to learn more myself. Now, whenever someone asks a question, even if I have zero idea what the answer is, I’m going to find out. And I’m hopefully going to do it in video form for them.”