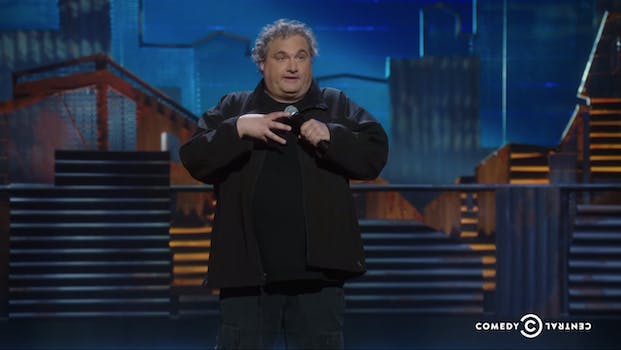 The cancellation came after he posted an explicit rant about ESPN2's Cari Champion.

Warning: This article contains language that is sexually explicit and may be NSFW.

Comedian Artie Lange’s scheduled appearance on the late-night Internet game show @Midnight was cancelled after he went on an explicit Twitter rant about Cari Champion, the co-host of ESPN2’s First Take.

They’re now telling me I can’t appear on @Midnight tonight cause of the pressure they’re getting from these groups.

Lange’s sexually explicit rant about Champion included vivid descriptions of several scenarios in which he called her his slave and made other references to slavery.

Here’s the scenario I’m using to jerkoff to chick on First Take I’m T. Jefferson & she’s my slave. She beats the shit out of me & runs free

The tweets sparked outrage, renewed the debate over the definition of comedy, and sent the hashtag #isupportcari into Twitter‘s trending topics. Once people discovered that Lange had appeared on ESPN in the past, they called for the network to issue a statement condemning Lange’s tweets.

ESPN did issue a statement, saying, “His comments were reprehensible and no one should be subjected to such hateful language. They objectify and demean one of our valued employees under the thin guise of ‘comedy’ and are offensive to all of us. We will not dignify them with any other comment.”

TMZ reported that Lange has now been banned from appearing on ESPN.

Lange tweeted out a lengthy explanation/non-apology to Champion on Wednesday afternoon, telling her that “if this hurt u [sic] in anyway I’m sorry.”

I won’t debate if the tweets were funny. That could take minutes of precious time left in my career. The issue is do they warrant an apology

Tricky question. I would rather load trucks for a living then ever apologize to one of these awful PC groups ruining the country

So that’s a NO. But if it upset the lady in question that’s another story. Let me say to @CariChampion if this hurt u in any way I’m sorry

Lange followed his announcement about being yanked from @Midnight with a series of defiant, tone-deaf tweets that showed he had learnt nothing from the incident.

But who cares. I love the show & it’s my living but who cares. These groups have won again. All I care about is @CariChampion Truly

But I’m sure you’ll be ok. You’re gorgeous & talented. I hope that didn’t offend u. To the PC army. Congrats! U won again! Gluten free cake!

I don’t hate women. And to u PC groups that did this I wanna be clear. Go FUCK yourselves! Now get back to saving the world. Done. Peace