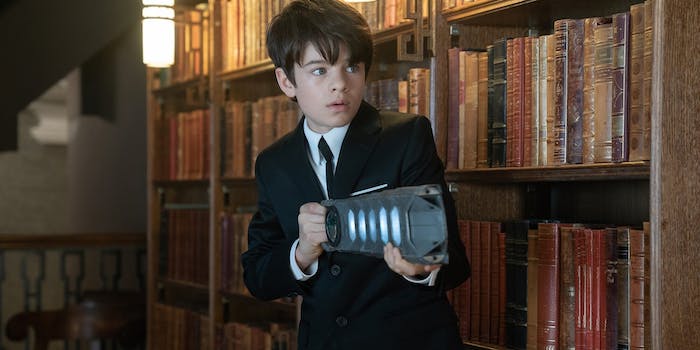 This bland and disjointed Disney+ movie bears little resemblance to the novels.

After almost two decades in development hell, beloved children’s fantasy novel Artemis Fowl has finally made it to our screens. Unfortunately, the finished product is a dud. Bearing little resemblance to the source material, Disney‘s Artemis Fowl is clunky and forgettable; another identikit adventure movie where heroes chase after a McGuffin while fighting CGI monsters. It also bears the familiar hallmarks of being absolutely butchered in the editing room.

Ferdia Shaw stars as 12-year-old Artemis Fowl II, scion of a wealthy Irish family. He’s a child prodigy and allegedly a criminal mastermind, although the film mostly reduces this to a bit of puzzle-solving. He was far more dastardly in the books: a spoiled brat who used his wealth and intelligence to unearth a secret world of fairytale creatures, committing various kid-friendly crimes. Some of the heist stuff remains, but this is Disney, so the story is now about Artemis heroically trying to save his kidnapped father (Colin Farrell) from a magical villain. Ferdia Shaw does not give an especially engaging or characterful performance, which may explain why so much screentime goes to other characters.

Eoin Colfer’s Artemis Fowl novels are a high-tech Ocean’s Eleven riff on Irish folklore, with Artemis and his bodyguard, Domovoi Butler, trying to outwit various fairies and goblins. Loosely based on the first book, the film co-stars Lara McDonnell as the fairy cop Holly Short, and Josh Gad as the dwarf burglar Mulch Diggums—an annoying comic-relief role with far too much screentime and not enough actual comedy. Nonso Anozie plays Butler, a casting choice with dubious optics: a loyal Black servant acting as the muscle for a young white aristocrat. He’s joined by his 12-year-old niece Juliet (Tamara Smart), whose oddly truncated role mostly consists of fetching snacks and appearing in the background of a few action scenes. The best character by far is the fairy police chief, because it’s fun to see Judi Dench barking orders at people while wearing elf ears and a shiny sci-fi uniform.

Directed by Kenneth Branagh and written by Conor McPherson and Hamish McColl, Artemis Fowl is oddly disjointed, barely hanging onto its formulaic Hollywood structure. The first third consists of exposition scenes: Artemis being introduced, his father explaining fairy mythology, Josh Gad providing explanatory voiceovers for the fairies, etc. The whole thing is bookended by an interrogation scene with Mulch Diggums, something that feels like it might have been added in reshoots: A series of static monologues where Josh Gad just talks straight into the camera, telling the audience what’s going on.

95 minutes isn’t unusually short for a children’s movie, but the uneven tone certainly resembles other films that were hastily rejigged during post-production. Judging by casting announcements and earlier trailers, the final version of Artemis Fowl removed a bunch of material, including a subplot filmed in Vietnam, a role for Artemis’s mother, and a character played by Watchmen’s Hong Chau. Not that I’m suggesting some kind of unfair #ReleaseTheBranaghCut situation, of course. The earlier version may have been even worse.

Originally slated for release in August 2019, Artemis Fowl was delayed for almost a year, and ultimately shunted onto Disney+. Compared to heavy-hitters like Mulan, you can see why Disney gave it the boot. As an inoffensive adventure movie suitable for 6-to-12-year-olds, it will keep kids busy in front of the TV for an hour and a half. It is not, however, worth the price of a movie ticket —and fans of the books will not be impressed.

Artemis Fowl comes out on Disney+ on June 12.