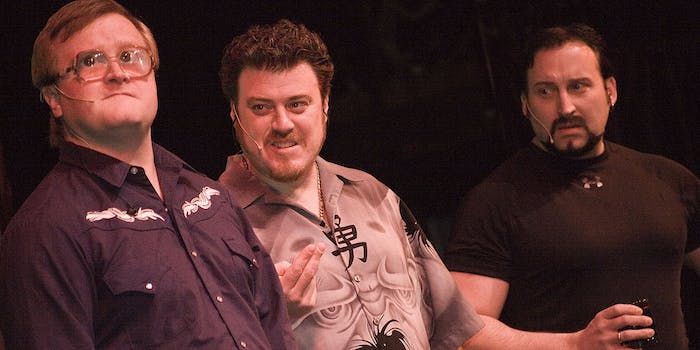 ‘Trailer Park Boys,’ ‘Arrested Development,’ and the art of the Netflix reboot

How two shows looked from beyond the television grave.

Just over a year ago, Netflix conducted a bold experiment with the fourth season of Arrested Development, daring to come face-to-face with hardheaded fandom’s oldest question: Could a long-dead show be revived with its former glory intact? The results were mixed and ultimately inconclusive. Even as a fierce defender of that season, I can’t deny that it felt like watching seasons 1-3 after they’d returned home from Pet Sematary. Something had gone funky in the resurrection process; the show was back, but it was… different.

Like Arrested Development, Trailer Park Boys had been dead for a full seven years before Netflix rubbed the defibrillator paddles together and attempted resuscitation. But unlike with Development, the original producers were not returning; 2013 negotiations had decided that, following the release of the series’ third feature film (Don’t Legalize It), Michael Volpe, Barrie Dunn, and Mike Clattenburg (who had directed and edited the entire show’s run) were passing all rights to the show’s lead actors and and writers: Mike Smith, Robb Wells, and John Paul Tremblay, otherwise known as The Boys.

The Boys were obviously anxious to return to the world of Sunnyvale, wasting no time in mapping out four seasons of new material and locking down the first two with Netflix. All the original actors were returning to the show (even Cory Bowles, who, after a falling out with the previous producers, had been absent since the sixth season). But what would those two seasons look like without Clattenburg? Their last effort without him was The Drunk and On Drugs Happy Fun Time Tour, which was entirely too insane to serve as an indicator for how they’d handle something like TPB.

Only the wizards at Netflix HQ know the hard numbers for the eighth season of TPB, which was released on Sept. 5, but the sentiment online looks good for the show’s future. On Reddit, many posters on r/trailerparkboys are hailing it as the series’ best season yet, with more conservative opinions still placing it above the show’s sixth and seventh seasons. Looking at 100 tweets mentioning TPB, 11 percent were positively commenting on the new season, with no tweets saying anything negative about it. Most importantly, when it comes to future leverage with Netflix, 16 percent of those tweets were from newcomers to the series; it’s always important to satisfy old fans, but it’s the new blood that Netflix needs for bolstering subscription numbers.

Please everyone do your part in spreading the word about Trailer Park Boys. It changed my life more than the Bible did

With season 9 already locked down for a release on Netflix, seasons 10 and 11 are still up in the air, despite The Boys already confirming that they’re producing them under their Swearnet label regardless of whether Netflix will want them. It’s hard to see why Netflix wouldn’t want them, though. With only half of the show’s previously credited writers, The Boys have shown that they’re capable of providing new material on their own that lives up to fan expectations. Previous writer Jonathan Torrens, who also portrays J-Roc on the show, is allegedly joining the writing team again for season 9 (and may also be hopping behind the camera, as Cory Bowles, who plays Cory on the show, did in season 8).

With a creative team still operating at optimal levels, and a budget that’s a fraction of Netflix’s other original material, there’s no reason to believe that the show won’t continue airing on the online network for as long as The Boys feel like keeping it there (a Reddit AMA quotes them as saying “Netflix is fucking awesome!! Total creative control”). Netflix may have started its experiment on reviving old shows with Arrested Development, but the eighth season of Trailer Park Boys is the project that proves, beyond all doubt, that it can be successfully done.