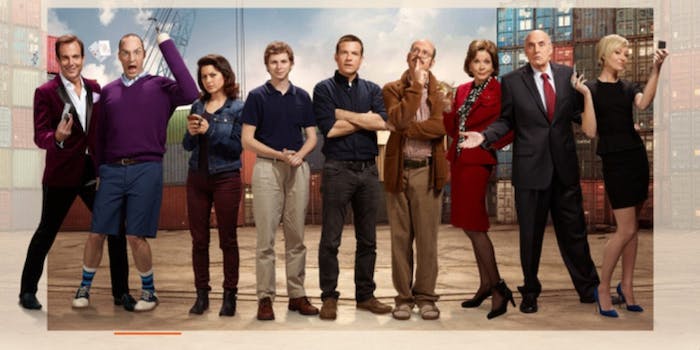 You can now watch “Arrested Development” in chronological order

This seems inevitable,  but it’s still mindblowingly awesome that someone took the time to do it: Some amazing soul on Reddit has recut all of Arrested Development Season 4 to make new episodes that are in chronological order. The consensus so far is that the versions of the episodes edited by redditor morphinapg are superior, funnier, and easier to understand.

The new season has had mixed reviews, but one thing everyone has been in agreement on is that you have to watch more than once to comprehend everything that’s going on and to fully get all the jokes.

“I did as much as I could to make these feel like real episodes,” morphinapg wrote in the post. “I made sure to separate the episode by storylines, rather than looking for specific times. I also included the opening theme, which I modified myself, and also the “on the next Arrested Development” as well as the credits (although the credits for episodes 1-11 are just a repeat of S04E01’s credits).”

Morphinapg also edited the narration, sometimes cutting it all together to make smoother transitions.

“For large scenes with multiple perspectives I would make sure to not have any duplicate things happening in the background, which did require a few cuts here and there, but nothing major. Most of that only happened in the police station scene, most other scenes were linear enough to easily be edited,” the redditor wrote.

“I tried to keep as much original editing as possible, unless chronology required a split. The music does occasionally sound weird between edits, but for the most part I think the edits, and the episodes themselves, work pretty good for what I had to work with. I can’t 100% guarantee the accuracy of my ordering, but I feel like I did a pretty good job. I did allow occasional slight backtracking, if placed at the beginning of an episode, but it doesn’t affect the chronology very much.”

Holy cow, that’s a lot of work. If anyone ever doubted AD had dedicated fans, just imagine this user slaving over their computer all to re-edit an entire series of a TV show, for free.

There is one small thing Morphinapg would like in return, though: “If there are any people here who worked on AD, I have made a Blu-ray with my episodes on them and would love to send you a copy. I’d love to hear what people who have worked on the show think of my episodes.”