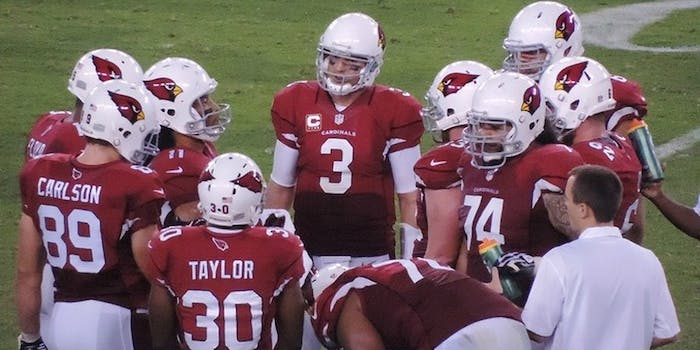 As the NFL and the media who cover it continue to try to infiltrate the technological world with more livestreamed games, more microchips embedded on players, and more unconventional ways to figure out if a player is good at his job, the league is trying something a little different for Amazon Video.

The NFL announced Monday that it had created a new series called All or Nothing for Amazon that tells the behind-the-scenes story of the 2015 Arizona Cardinals, one of the most successful teams in the league last year.

Though the HBO series Hard Knocks has been a mainstay for the past 15 years in showing what an NFL training camp is like, this is the first time a series has followed a team for the entire regular season.

“All or Nothing will deliver the ultimate behind-the-scenes look at America’s most popular sports and entertainment media property—the NFL’s regular season—and we couldn’t have asked for a better franchise for our inaugural season than the Arizona Cardinals,” Jordan Levin, the chief content officer of NFL Media, said in a statement. “We’re thrilled to team up with Amazon on this new series, providing fans even more ways to engage with award-winning NFL programming over a variety of digital channels.”

The Cardinals went 13-3 in the regular season and won the NFC West title with quarterback Carson Palmer throwing for 4,671 yards, receiver Larry Fitzgerald recording one of the best seasons of his career, and the defense ranking as one of the league’s best. Also, there was at least one fantastic celebrator of good fortune.

But Arizona lost to the Panthers in the NFC title game and, thus, ended the season on a down note. But the season-long soap opera likely will be fun to watch—especially since the highly capable NFL Films, winner of 121 Sports Emmys, is the one to shoot it.

“We take tremendous pride in the dedicated and talented people that make up our organization and welcomed this opportunity to showcase them,” Cardinals president Michael Bidwill said. “This unprecedented look into what it takes to compete in the National Football League is something that we think viewers will find fascinating. We all know the quality of work NFL Films does and are just as excited to work with Amazon to find such an innovative way to distribute this series.”

The show, the NFL said, will premiere later this summer and will be eight, one-hour episodes. Amazon customers can watch on the Amazon Video app on TVs, connected devices, mobile devices, or online.