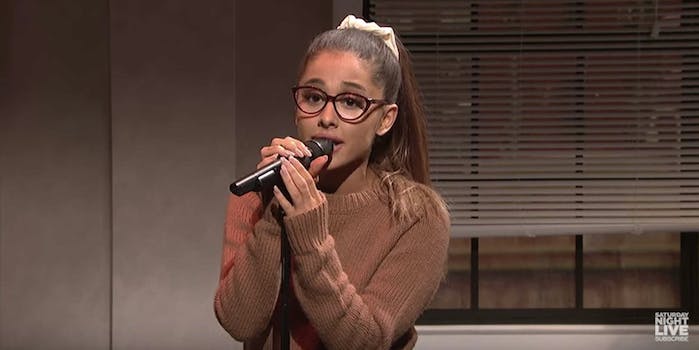 She has a voice all her own, along with the voices of every other major pop diva.

Ariana Grande has an incredible and distinct singing voice of her own, but the petite pop star has the ability to do creepily good impressions of fellow divas—and she showed us that once more on the most recent episode of Saturday Night Live.

Grande, 22, served as host and musical guest for the March 12th episode, and she brought her singing chops into her host duties. In a sketch poking fun at Jay Z’s music streaming service, Tidal, Grande plays a shy intern whose powers of impersonation are called on to save the service when it crashes.

The Britney Spears, Shakira, Rihanna, Celine Dion and Whitney Houston channels are all going offline, and the intern must bust out her musical best to bring them back to life. When Grande hits the key change in “I Will Always Love You,” you’ll swear the dearly departed Houston was back on the SNL stage.

We first witnessed Grande’s powers of impersonation in a May 2015 appearance on The Tonight Show with Jimmy Fallon. She then returned to the show in September and played Fallon’s “Wheel of Musical Impressions.” During that appearance, she did a rendition of Christina Aguilera singing “The Wheels on the Bus” that likely stunned The Voice judge herself. Grande also brought back her icon Celine.

Mariah Carey may not be a fan. But it seems Grande could easily take her out, do her best impression, and no one would be the wiser.