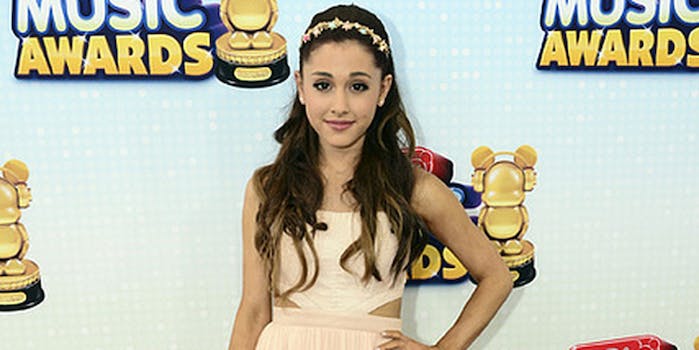 The Nickelodeon star and singer's fans have pushed her new single to #3 on the iTunes charts, and trended it on Twitter.

If you thought the “Baby I” Twitter hashtag had to do with the forthcoming royal child, you were wrong. Turns out fans of Nickelodeon actress and Broadway singer Ariana Grande have taken over Twitter to promote their idol’s new single, “Baby I.”

The hashtag “#BuyBabyIOnITunes” made the top trending topics on the site and fans also rushed to purchase the single on iTunes, jumping it to the No. 3 spot on the charts. It’s beating out Miley Cyrus’s “Song of the Summer” “We Can’t Stop” and is only being trumped by Robin Thicke’s catchy “Blurred Lines” and the new One Direction single “Best Song Ever.”

The fans’ goal with the hashtag is apparently to beat One Direction, which has 2,119 fan ratings on iTunes. Grande’s song already has almost double that with 4,116 positive ratings. Grande’s huge Twitter fanbase could soon cause her to triumph over the seemingly unbeatable hysteria surrounding the British boyband.

Last night, #BuyBabyIOnITunes was the No. 1 trending topic in the world. And the single sat at number 2 on the iTunes charts as recently as three hours ago. Grande, 20, tweeted her thanks to her fans, and also counted down the single’s launch and then subsequent quick success. Though she’s appeared on TV, becoming a fan favorite on the show Victorious, Grande got her start singing in the Broadway musical 13.

Can her fans get her to number one solely through social media? Arianators might be the new Beliebers.