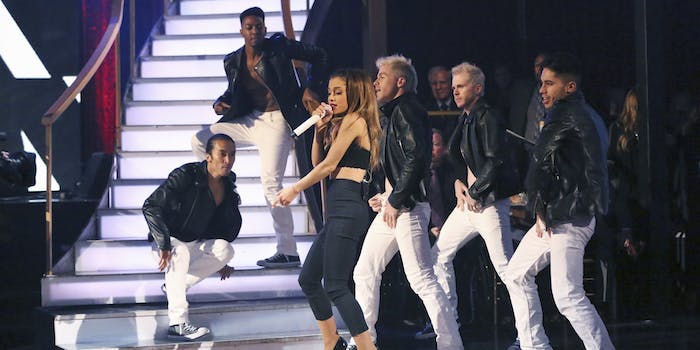 'I've never been prouder of this country.'

Ariana Grande is appealing straight to her fans in her latest apology after footage emerged of her licking a doughnut and saying that she hates America at Wolfee Donuts in Lake Elsinore, California.

She already released a statement on Twitter after TMZ posted the security footage, in which she discussed child obesity in America and the need to “educate ourselves” and stressed that she’s proud to be an American. The apology ended with “I apologize if I offended anyone with my poor choice of words,” which some may have taken as a non-apology.

But the following day, she released that she missed her opportunity to actually apologize, and this time, she took the time to sit in front of the camera despite having just had her wisdom teeth removed.

She posted the video late to Twitter Thursday night prefaced with the words, “sorry babes.”

In the four-minute video, she expressed her embarrassment upon watching herself in the security footage and apologized for her behavior again (as well as her poor choice of words).

“Seeing a video of yourself behaving poorly is such a rude awakening—it’s like, you don’t know what to do,” she said. “I was so disgusted with myself. I wanted to shove my face into a pillow and disappear.”

Authorities are now investigating the security footage while health officials will investigate Wolfee Donuts, which had its rating lowered to a B after the incident, to find out why the shop allowed the doughnuts to be exposed to the public.

Update 10:21am, July 14: The owner of the doughnut shop has declined to press charges against Grande.