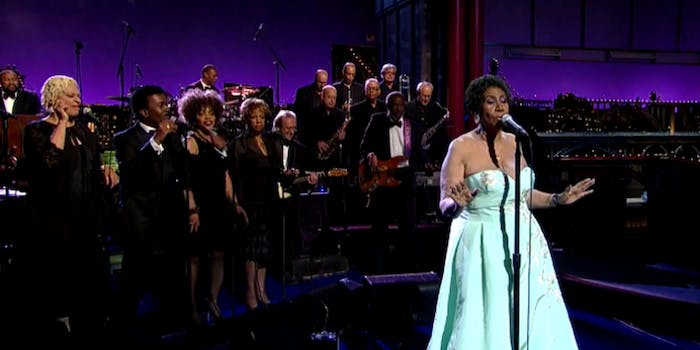 Adele’s version already shakes the walls, but Franklin packed her own soulful punch.

Aretha Franklin has a new album of covers out on Oct. 21, and last night she debuted one of them on the Late Show with David Letterman: “Rolling in the Deep.”

Franklin starts the performance with the Adele song, then segues perfectly into Marvin Gaye and Tammi Terrell’s “Ain’t No Mountain High Enough,” backed by a full band. Adele’s version already shakes the walls, but Franklin packed her own soulful punch.

Her upcoming album, Aretha Franklin Sings the Great Diva Classics, will also feature covers of Sinéad O’Connor’s “Nothing Compares 2 U,” a mashup of “I Will Survive” and Destiny’s Child’s “Survivor,” and Etta James’s “At Last.” André 3000 and Babyface helped out as producers on the album; Franklin was supposed to work with Danger Mouse, but the scheduling didn’t work out. Please, someone make an Aretha Franklin-Danger Mouse album happen.

Some have wondered if Franklin was Auto-Tuned or overproduced on her new album, but last night’s performance was very much a raw, passionate delivery.