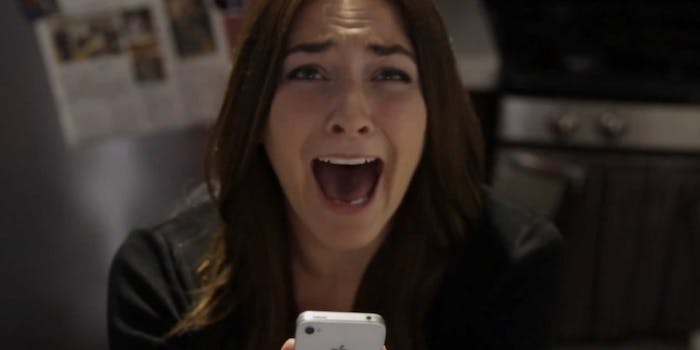 YouTube spoofs ‘Are You Afraid of the Dark?’ with modern-day tales

With Are You Afraid of the Dark? nostalgia at fever pitch, the parodies show up to the party.

While you can watch Are You Afraid of the Dark? online, most of it just isn’t scary these days. Thankfully, Elite Daily’s latest YouTube series pinpoints current societal fears and blows them up in a hilarious parody inspired by Nickelodeon‘s early ’90s staple.

Are You STILL Afraid of the Dark? takes on modern, millennial themes and worries. In Tales of the Facebook Stalker, for example, one girl realizes the dangers of Facebook stalking.

There’s also Deadly Walk of Shame and The Girl Who Literally Couldn’t Even, further tales of modern mayhem. Sure, creepy swimming pools and haunted carnivals were frightening in the ’90s to teens, but nowadays social suicide and the dangers of misusing “literally” are much scarier.

Elite Daily doesn’t corner the market on Are You Afraid of the Dark? spoofs, however. Fans have also turned the iconic Bill Murray stories, where Murray allegedly does something out of the ordinary to pedestrians, into a scary tale about a rogue celebrity who could set upon you at any time.

Of course, you can also go back to the source and watch actual Gary from Are You Afraid of the Dark? live a modern nightmare of being a former child star. All I know is the appeal of the Midnight Society doesn’t seem to be going anywhere.