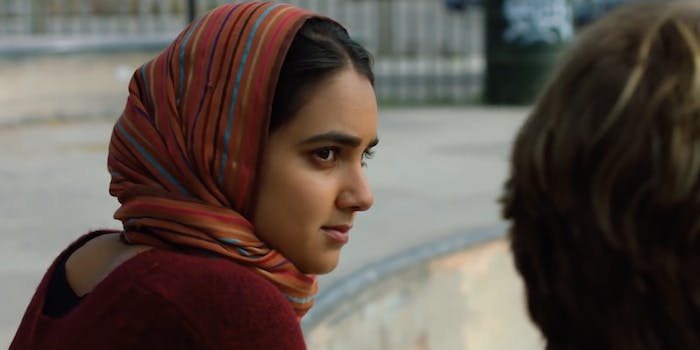 Apple TV+’s Hala is a new sort of coming-of-age story that excels in its subtlety and quietness. Featuring Australian breakout star Geraldine Viswanathan (Blockers) as Hala Masood, a Pakistani-American existing within two worlds—in suburban Illinois in a decidedly Western environment, and within a strict, traditional Muslim household.

The film, which premiered at Sundance Film Festival, isn’t wholly unlike other recent coming-of-age films like Eighth Grade, for example, in its storytelling. And yet, writer/director Minhal Baig introduces a largely untouched track for the mainstream: a non-white second-generation immigrant’s story told along similar plotting lines as, say, Lady Bird, without grand explosions of its principal character.

Baig communicates the twoness in which Hala dwells with her somewhat Westernized, crossword-playing attorney father, Zahid (Azad Khan), and her homemaker mother, who understands but speaks no English, strictly adhering to Pakistani culture. Hala looks different from everyone in school, but she has friends, though they operate without the same ideological restraints.

With that baseline established, the second half of the film is about an immigrant striving for some semblance of freedom from intractable societal/cultural clashes that invariably stifle her progress. There’s a sensitive blue-eyed boy (Jack Kilmer) she’s falling for, but she knows it’s a nonstarter; it’s understood she will marry a Muslim man in a traditional arrangement.

Always in the background, though, is the relationship of her parents, deteriorating under the same pressures she experiences. It is here that Baig explores notions around patriarchy. It turns out that Hala’s mother desires a self-agency she could only dream about in Pakistan—and initially believed she had very little of in her marriage. Interestingly enough, it is the Westernized husband who leans into his religious orthodoxy when pressed.

A silent explosion of a film, Hala shines in the quiet resolve of its main character. Baig’s lens regularly captures characters’ expressions, where Viswanathan’s exceptional talent in managing full, tangible emotion is on display. The director places the film in the hands of her star, who capably carries the proceedings with charm, grace, and humor running opposite of the slapstick of Blockers. No longer a star in the making, Hala is Viswanathan as a star made.