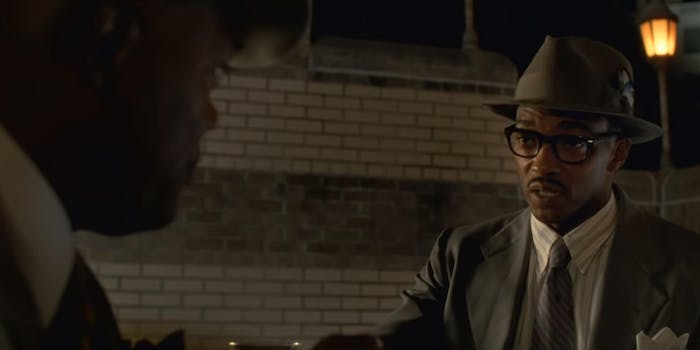 Apple says it only recently learned of allegations of abuse against Bernard Garrett Jr.

The premiere of Apple TV+’s The Banker has been canceled as allegations of abuse against its co-producer Bernard Garrett Jr. have been made public.

The movie, which stars Samuel L. Jackson and Anthony Mackie, tells the story of Bernard Garrett Sr., a Black man who took on a real estate venture in the 1960s and used a white man (Nicholas Hoult) as a way in. It was set to be Apple TV+‘s first original film and debut at the AFI Film Festival on Thursday night. According to The Hollywood Reporter, in early November, Garrett Jr.’s half-sisters, Cynthia and Sheila Garrett, reportedly made Apple aware of claims of sexual abuse that happened when they were younger and Garrett was living with them, in the early ’70s. There are also claims that the film leaves out the sisters and their mother, Linda, in favor of Garrett Sr.’s first wife (played by Nia Long).

Cynthia Garrett spoke about the abuse in a 2016 book and publicly denounced the film on Twitter. In an open letter quoted by The Hollywood Reporter, she says, “This entire project is poisoned. It’s the fruit of crime, lies, and deception.”

THE BANKER Trailer (2019) Samuel L. Jackson, Anthony Mackie Movie https://t.co/44EVCwKy1n via @YouTube. LIES TO HIDE THE PRODUCER WHO SEXUALLY MOLESTED MY SISTER AND I FOR YEARS THEN STOLE MY MOMS LIFE STORY WITH OUR DAD. WOW!!!!! #TIMESUP. THIS FAMILY WILL NOT REMAIN SILENT!

In the comment section of an Indiewire piece about The Banker, reported from a Nov. 5  Indiewire-hosted panel event that included Garrett Jr. and director George Nolfi, Cynthia Garrett wrote: “What’s been done here is shocking. My dad would turn in his grave. No script was ever written 20 years ago. My dad wrote a small book he gave us kids. Truth was what he and my mom wanted. Instead HOLLYWOOD has partnered with our half brother and stolen my mom’s story after molesting me and my baby sister for years.”

In a statement, Apple said it only discovered there were “some concerns” about the film “last week”:

We purchased The Banker earlier this year as we were moved by the film’s entertaining and educational story about social change and financial literacy. Last week some concerns surrounding the film were brought to our attention. We, along with the filmmakers, need some time to look into these matters and determine the best next steps.

The Banker was set to be released in theaters on Dec. 6, likely for an awards push, then on Apple TV+. Garrett Jr. has reportedly stepped down as a producer; his name is no longer on the film’s IMDb page.