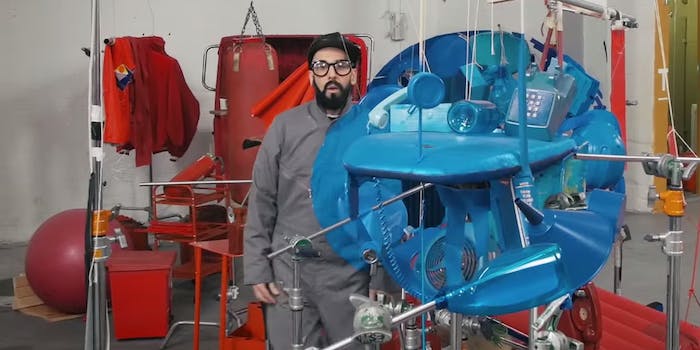 This isn’t the first time Apple has been accused of copying pre-existing concepts or visuals.

Indie band OK Go found much of their audience thanks to their viral music videos, so it makes sense that they might be worried about video plagiarism.

Their latest music video, “The Writing’s on the Wall,” was shot in a single take, creating optical illusions using various props and camera angles. Like all of OK Go’s videos, it’s pretty unusual and required a great deal of work to design, so they were less than happy when they learned that Apple had used the same technique (and the same production company) for a new TV commercial called “Perspective.”

If you watch the two videos together, you can definitely see the similarities. Apple’s video uses a single tracking shot to show murals, objects, and written messages from different perspectives, although the similarities do not seem to go as far as outright plagiarism.

The real issue is that OK Go’s manager, Andy Gershon, claims he pitched this precise video concept to Apple back in April, and they turned him down. Apple then went on to hire the same production company and director who masterminded OK Go’s original video.

As Businessweek points out, this isn’t the first time Apple has been accused of copying pre-existing concepts or visuals for advertising purposes. In a case that sounds very reminiscent of OK Go’s complaints, the band Postal Service highlighted similarities between their music video for “Such Great Heights” and an Apple/Intel TV spot. Apple had hired the same people who made the Postal Service video.

Gershon told Businessweek that the band are currently exploring their legal options, adding, “The videos speak for themselves, and you can draw your own conclusions.”