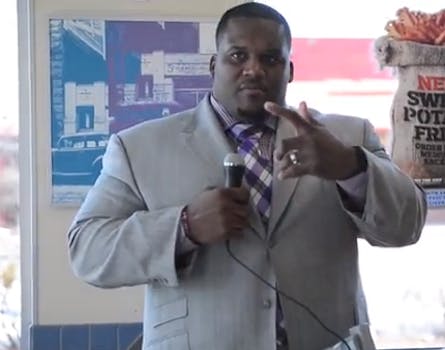 It's been nine years and about 9 million laughs, but eventually all good things must come to an end.

It’s been nine years and about 9 million laughs, but eventually all good things must come to an end. On Sunday, former Chicago Bears defensive end and all-around funny dude Anthony “Spice” Adams announced that he was retiring from the game of football.

The amicable lineman announced his split from the game in a rather expected fashion, turning to YouTube to produce a fake press conference from inside of an empty White Castle restaurant on the outskirts of Chicago.

“I enjoyed my time in San Francisco and here in Chicago,” Adams says behind a White Castle counter. “Appreciate y’all. Thanks a lot.”

The Detroit native, 32, had actually spent the entire 2012 season out of football, looking for a team that wanted to invest in his boisterous personality and 10.5 career sacks. He used YouTube to help lead that free-agency charge, producing a number of videos that, among other things, showcased his humility, humor, and out-of-this-world athletic ability.

The free-agent operation never worked out, but Adams did obtain a pretty solid fanhood online, with more than 260,000 fans turning out for his “Stuff NFL Free Agents Say” video and another 118,000 for “Basketball Is My First Love.”

“That’s just how I act all the time,” he told the Daily Dot last August. “People don’t get a chance to see it. I would do stuff in the locker room, and I always noticed that people would be taping it and putting on Twitter. It would crack people up. I realized that I should put it all onto a video.”

Adams didn’t announce plans for anything post-football, but you can expect he’ll be around. After all, 300-pound people named Spice who’ve demonstrated a propensity for hamming it up for the camera usually have a tendency to stick around.