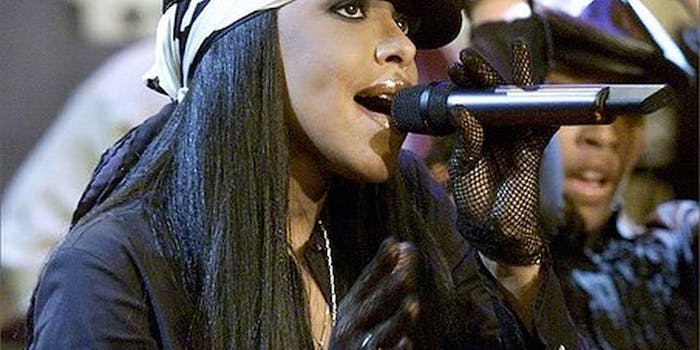 If Aaliyah were still alive, what would she tweet?

The 10th anniversary of the singer's death prompts tragicomic reactions on Twitter.

A late R&B singer who once told people to “Rock the Boat” is now rocking Twitter on the 10-year anniversary of her death.

Aaliyah, the sultry singer from Brooklyn, died on Aug. 25, 2001, in a plane crash on Abaco Island in the Bahamas, according to Rolling Stone. She was 22 years old.

Thousands of people paid their respects to the singer on Twitter using phrases and hashtags like Rock the boat, #oneinamillion, and #aaliyah. These terms have been mentioned more than 44,000 times combined in the last 24 hours, according to statistics from Topsy, a social media search engine.

Aaliyah was at the top of her career when she died. She had sold more than two million albums, starred in “Romeo Must Die” and “Queen of the Damned,” and had been cast in both sequels to “The Matrix,” the magazine noted.

Some of her well-known singles include “If Your Girl Only Knew,” “Rock the Boat,” and “I Care 4 U.”

But songs never in her repertoire are appearing on another trending topic, #AaliyahsAirplanePlaylist, used by some to poke fun at the singer’s death.

That trending topic has earned the ire of thousands of loyal Aaliyah fans like @RonReaco.

“#AaliyahsAirplanePlaylist is a very disrespectful trending topic; cherish the music, and not rejoice in such a horrific downfall,” tweeted @RonReaco.

The Daily Dot has reached out to Aaliyah’s family for a comment on these trending topics and is waiting to hear back.

Here are some tweets that caught the Daily Dot’s attention.