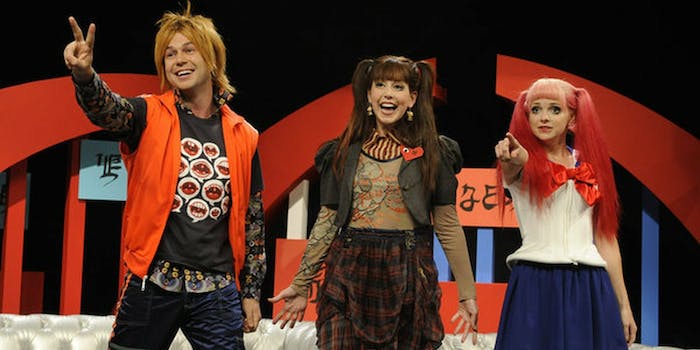 A subculture lands in the limelight, and community members are outraged—at themselves.

Fans of Japanese anime, long ignored by the mainstream media, are getting their moment in the spotlight this week after Saturday Night Live did a sketch inspired by the tight-knit fan community.

However, what should have been an occasion for celebration has been overshadowed by nerd rage, as the exaggerated portrayal struck a nerve.

“J-Pop America Fun Time Now!” pokes fun at Western people who are obsessive about Japanese culture but don’t actually know very much about it. The skit features three anime-crazy college students and their frustrated Japanese professor.

At Crunchyroll, an anime fan community one million members strong, the skit hit a little too close to home. When the site’s blog posted the video, few were laughing.

“Making fun of anyone is a cheap attempt at comedy. SNL has never been funny at all,” wrote BattlerEndless9.

“they used to have some sort of respect for the people they were poking fun at, sort of in a friendly joking type of way. but this just felt mean,” wrote mimosa_usagi.

Even as commenters accused the skit’s writers of “bullying,” many acknowledged its veracity. Fans on Crunchyroll, Twitter, and the Anime News Network forums said the parody was spot-on. Some fans do like to pepper their English speech with Japanese words like baka and kawaii and others do, in fact, fantasize about being anime characters.

“You guys probably just don’t think this is funny because they basically summed up the population of crunchyroll,” wrote miko~.

“Ugh the snl skit brought back some much second hand embarrassment experiences from when I was in my uni’s anime club,” tweeted @silvercell.

So if it’s true, what’s the problem? For some fans, being cast into the limelight means many now feel judged for indulging in their hobby so enthusiastically.

“I love how enthusiastic some people get about anime, but I would feel ashamed if this is how its presented to people, even as a joke…” wrote wing0080.

“I am a little sad they put this on a major broadcast channel cause most people will believe we are all like this,” wrote rcbryantii. “Other than that, I found it pretty accurate.”