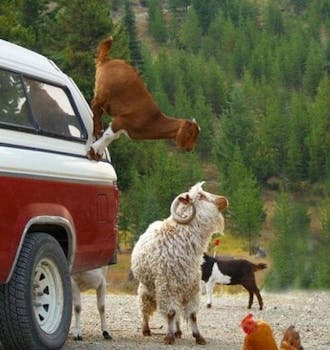 A place for displaced animals

"It's like Occupy Wall Street, but for animals," explains site's creator.

Nope, that isn’t Chuck Testa. That really is a bear in the grocery store. And yes, that’s an honest-to-goodness moose in a backyard pool.

They’re both examples of Animals in Places they Shouldn’t Be, a new Tumblr series. Al Bernando from Columbus, Ohio, launched it shortly after seeing an incident that encapsulated the concept: dozens of exotic animals let loose on a local farm.

“There’s an aspect of dystopianism and collapse to the idea of wild animals invading civilized spaces, like homes or grocery stores,” wrote Bernando via email. “There’s a ‘The World Without Us’ romanticism in those images, even when they’re of a bear eating pizza.”

Bernando’s blog seems to have catered to the Internet’s longing for all things cute and weird. Within two hours, his blog was a front-page story on The Daily What and the Awl. From only nine posts, he has 315 followers.

A library circulation employee, Bernando said he wasn’t looking for instant fame. He noticed the address was vacant on Tumblr, a blogging site whose users favor elaborate, jokey names for their blogs, and thought it would entertain his Twitter followers. Now, his aspirations are set much higher.

“My ultimate goal is to become the Internet’s #1 clearing house for animals in places they shouldn’t be news,” he said.

Bernando said that while he doesn’t consider himself an animal-rights activist, he sees the incidents his blog portrays as small instances of animal retribution “for the cruelties and shortsightedness of humanity.”

Or, as he put it next: “It’s like Occupy Wall Street, but for animals.”