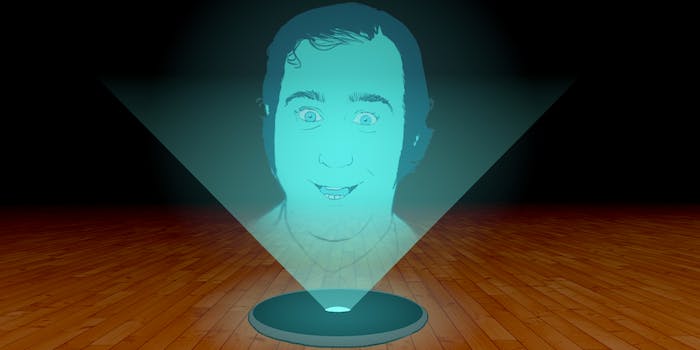 'It's dead out there' is going to take on a whole new meaning.

Missed seeing comedians Redd Foxx and Andy Kaufman while they were living? Soon, you could see them again—as holograms.

Hologram USA, the company headed by billionaire entrepreneur Alki David, is responsible for this revival. It recently announced a partnership with the comedians’ estates, which would put them both back in venues in 2016.

David Nussbaum, Hologram USA’s senior vice president of sales, has been leading this project. He says the company is hard at work creating some “clever illusions,” and that while, yes, this is a business, it’s also just full of fans. Contacting the families or estates of potential hologram candidates usually involves a cold call, and then a partnership is created with “as much authenticity that can possibly be done without them actually being there,” as well as the continual approval of the performer’s estate through each step in the process.

“We don’t want an Andy Kaufman superfan sitting front row center saying, ‘Eh, that’s not Andy. He would never do it that way.’”

Foxx, who died in 1991, is perhaps best known for Sanford and Son, but he was a groundbreaking and prolific standup before that show, releasing a string of “party records” from the ’50s to the ’70s. Kaufman, who died in 1984, was less of a traditional standup comedian. His bits on Saturday Night Live and Late Night With David Letterman have circulated widely online, and he was fond of characters and stunts, which makes this hologram performance even more of a mind-bending proposal.

Michael Kaufman, Andy’s brother and his estate’s representative, told the New York Times that this is “the right platform for the new generation of audiences to experience Andy.” Kaufman’s name has been invoked many times in the Internet era, with “Kaufmanesque” becoming a descriptor for obtuse, challenging comedy. If he were still alive, Michael thinks he would have “busted the Internet. This keeps him alive.”

This new Kaufman will likely only stoke the fires of “Andy Kaufman is still alive” conspiracy theorists, who have used the Internet to exchange blurry bits of proof.

“We nearly didn’t press release [the partnership] at all,” Nussbaum said. “We were just going to have Andy Kaufman show up somewhere and do standup. That would have blown people’s minds on its own. I think that Andy and Redd and all of our artists deserve to be publicized and deserve their own show and press release. But I think with Andy, we could have gotten away with having him just show up on a talk show or an open mic or even hosting Saturday Night Live.”

Nussbaum says the material for Kaufman and Foxx’s shows will include some of “best of” but hints that there “may or may not be additional material.”

So Andy Kaufman and Redd Foxx could somehow be doing new material?

Great or not, more and more dead performers are coming back. Bruce Lee was revived for a whiskey commercial. Paul Walker was reanimated for Furious 7. Eazy-E performed at Rock the Bells in 2013. Tupac appeared at Coachella with Snoop Dogg in 2012. Next year, Hologram USA will be digitally resurrecting Whitney Houston for a world tour. Legendary singer Billie Holiday is performing later this year at the Apollo as a hologram, which is a sentence none of us could have predicted.

When a celebrity passes, social media becomes a medium for coping, even if it’s by proxy and retweet. But now celebs have to consider another layer to their eventual afterlife: Will they be made into holograms?

Before his death in August 2014, Robin Williams filed a deed to restrict use of his image 25 years after his death. Rachel Alexander, a privacy lawyer, told the Guardian that this will likely become more popular for celebs as digital effects and the looming specter of holograms do as well:

The motive behind this seems to be firstly that Robin Williams wanted to make sure his image isn’t tarnished, with unauthorised images used in adverts for example or films, which technology has now made possible. I think it is very likely we will see more people doing it.

In this brave new world, it gets even more complicated. Last year, Michael Jackson performed at the Billboard Music Awards; Alki David attempted to prevent the performance, citing an infringement on patented hologram technology by Pulse Evolution, a rival company. That company sued David, claiming his complaint was a means to “divert public and industry attention away from Pulse Entertainment just as the company was being launched.” David also sued after a Homer Simpson hologram was used at Comic-Con in 2014, claiming patent infringement.

The hologram performance isn’t new, but shows featuring living performers point to a rapidly changing landscape that’s increasingly embracing virtual reality as entertainment. M.I.A. and Janelle Monae did a bi-coastal hologram performance in 2013; Black Eyed Peas’ Will.i.am famously appeared on CNN as a hologram in 2008; Hologram USA beamed Julian Assange to an event from the Ecuadorian embassy in London last year. Chief Keef’s July hologram concert at Craze Fest in Hammond, Indiana, which was to be a benefit for two victims of shootings, was quickly shut down, raising questions about free speech.

“The thing about that [Craze Fest] is, they were playing Chief Keef’s music all day at that festival,” a spokesperson for Hologram USA said. “It was the appearance of him as a hologram that was deemed to be too far.”

Hologram technology does have interesting implications for political dissidents or controversial figures, like Assange, in terms of getting them access. “But on the negative side, if people can squash [the Chief Keef hologram], which is really just a very high-tech and high-quality digital transmission,” the spokesperson said, “then what’s to stop them from squashing any digital transmission?”

There will be limitations, at least until hologram projection spaces are installed in venues. If people can’t get to the shows, there might be a livestream, according to Nussbaum; David does own streaming site FilmOn, which has seen its own legal issues.

And yet, so much of live comedy is the connection between the audience and the performer; the comedian feeds off the audience’s energy and response, which often informs where he or she goes next with their material. Won’t that get lost with the digital performance?

Nussbaum doesn’t think so: “People who are going to a hologram show are going for the experience.” He views it more as a movie, with the digital performer already anticipating when the audience might laugh. Kaufman, he says, was a natural fit for a hologram, then.

“He thrives on awkward silences.”

Would he be able to respond to a heckler? Yes, but Nussbaum doesn’t want to reveal too much. He paints a vision of the not-so-distant future: If you’re a performer, at a certain point, you have to hang it up. It’d be perfectly reasonable to film a comedian as a hologram, and then send it out on the road to keep revenue coming in. Soon, comedy clubs and venues might look like a scene from Disney World’s Haunted Mansion ride.

Kaufman and Foxx are returning to a comedy landscape that’s much different from the one they existed in. This digital revival is going to change what it means to be a touring comedian, and a fan of live comedy. But can we truly laugh along?