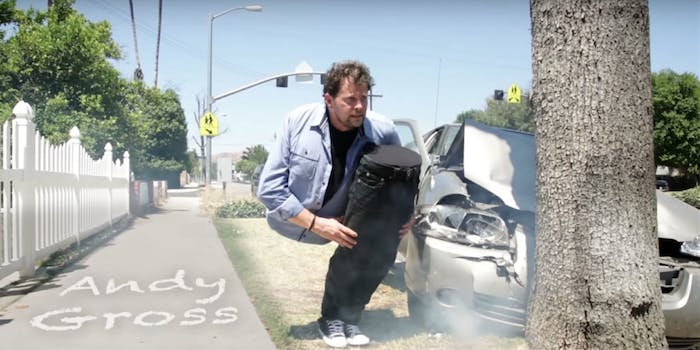 Andy Gross has not commented on the incident.

After a set at Purdue University over the weekend, comedian Andy Gross is facing accusations of sexual harassment.

According to the Indy Star, Gross, a magician and ventriloquist, performed on Saturday night as part of a yearly orientation event known as Boiler Gold Rush. The turning point in his set appears to be when he brought up a volunteer with the orientation program to assist with one of his bits. Freshman Andora Fess told the Indy Star: “He made her stand closer and closer to him and made a joke about that giving him an erection and making his pants seem to say ‘let me out,’ referring to his genitals.”

Fess said Gross then made the volunteer touch his upper thigh, and he can be heard joking that he “got a free feel out of it” in a video. He also reportedly made a Matt Lauer joke.

“It was just very distasteful,” Fess told the Indy Star, “and once he started doing that, people in the audience started to get up. He came into the crowd, and none of the women would volunteer, and he just kept making sexual jokes even as the crowd was leaving.”

Gross later brought up a male student to sit on his lap and be a “puppet,” but by that time, many had walked out.

If anyone saw the show at Purdue tonight, I hope that you can join me in boycotting Andy gross. We need to recognize sexual harassment for what it is and not let it go unpunished. No means no no matter where you are and who is watching. #AndyGrossIsGross

I am still in shock over what just happened. At Purdue’s BGR closing ceremonies, magician/comedian Andy Gross sexually harassed a girl on stage leaving her in tears afterward. @jimmyfallon do not have this man on your show.

The hashtag #andygrossisgross started circulating over the weekend, and there were calls to tweet at Jimmy Fallon and get Gross’s upcoming performance on The Tonight Show canceled, though an NBC spokesperson claimed that Gross was “not scheduled to appear and was never booked on the show.”

A representative from Purdue said in a statement: “On Saturday night, a comedian performed as part of our BGR student orientation closing session. Accounts differ as to what exactly happened on stage, but some portions of the performance were clearly inappropriate and contrary to the university’s values of respect and support for all.”

The statement also claims the university won’t be working with Gross again.

Gross has not commented on the incident.