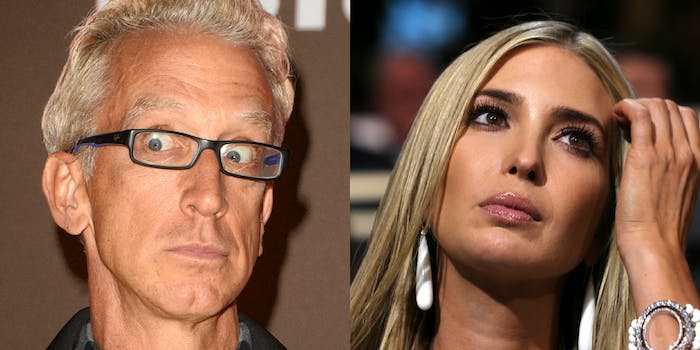 Shocking footage emerges after comedian is charged with sexual battery.

Andy Dick was charged with sexual battery this week for allegedly groping a woman in Los Angeles, and the comedian’s troubling history of sexual misconduct is coming to light.

In a 2007 Jimmy Kimmel Live segment, which is going viral after being flagged by the Daily Mail, Dick is kicked out of the studio by security after repeatedly groping Ivanka Trump.

“Andy, you promised you would behave,” Kimmel says, trying to calm the uncomfortable situation. Moments later he halted the interview.

Ten years ago Dick was arrested for groping a 17-year-old. Last year he was fired from a movie after being accused of sexual misconduct. According to Variety, he’s also been accused of indecent exposure in the past.

“Andy please don’t touch Ivanka,” Kimmel says after the now-52-year-old comic grabs her leg for the first time. “Donald Trump will kill both of us.”

Shortly after the incident, Kimmel told Hollywood.com that Dick tried to kiss Ivanka as well when she came out.