Leukemia survivor Andrew McMahon on turning his fans into activists

Checking in with the former Something Corporate and Jack's Mannequin frontman.

He laughs it off, but dedicating his youth to criss-crossing the continental U.S. has left Andrew McMahon with thousands of actively engaged fans who see him as a friend.

“Growing a band from grassroots in a time when it was really traditionally grassroots where you were going from place to place and shaking every hand, I think I have taken that approach into this modern age and I really consider whether friend is the right word,” he tells the Daily Dot. “It’s about as close as you can be to people you don’t know.”

They’ve been through a lot together.

I can’t remember who told me that the former Jack’s Mannequin and Something Corporate frontman was diagnosed with acute lymphocytic leukemia. It was June 2005, the early days of social media when Facebook was a niche, collegiate fad—being able to access your favorite celeb was not as easy as checking their Twitter or Instagram.

As someone who had been a fan of McMahon’s for years, worked with him on shows when he played at my school, and is the same age, the news hit home. I scoured the Internet, researching the disease and trying to get as much information about his condition as possible.

It was in his blog, among posts about a new Razr phone and selling his childhood home, that his fans learned about McMahon’s diagnosis, treatments, and recovery. The nonstop transparency on his part was curious because he maintains that “even at 18, I was fearful of technology.” 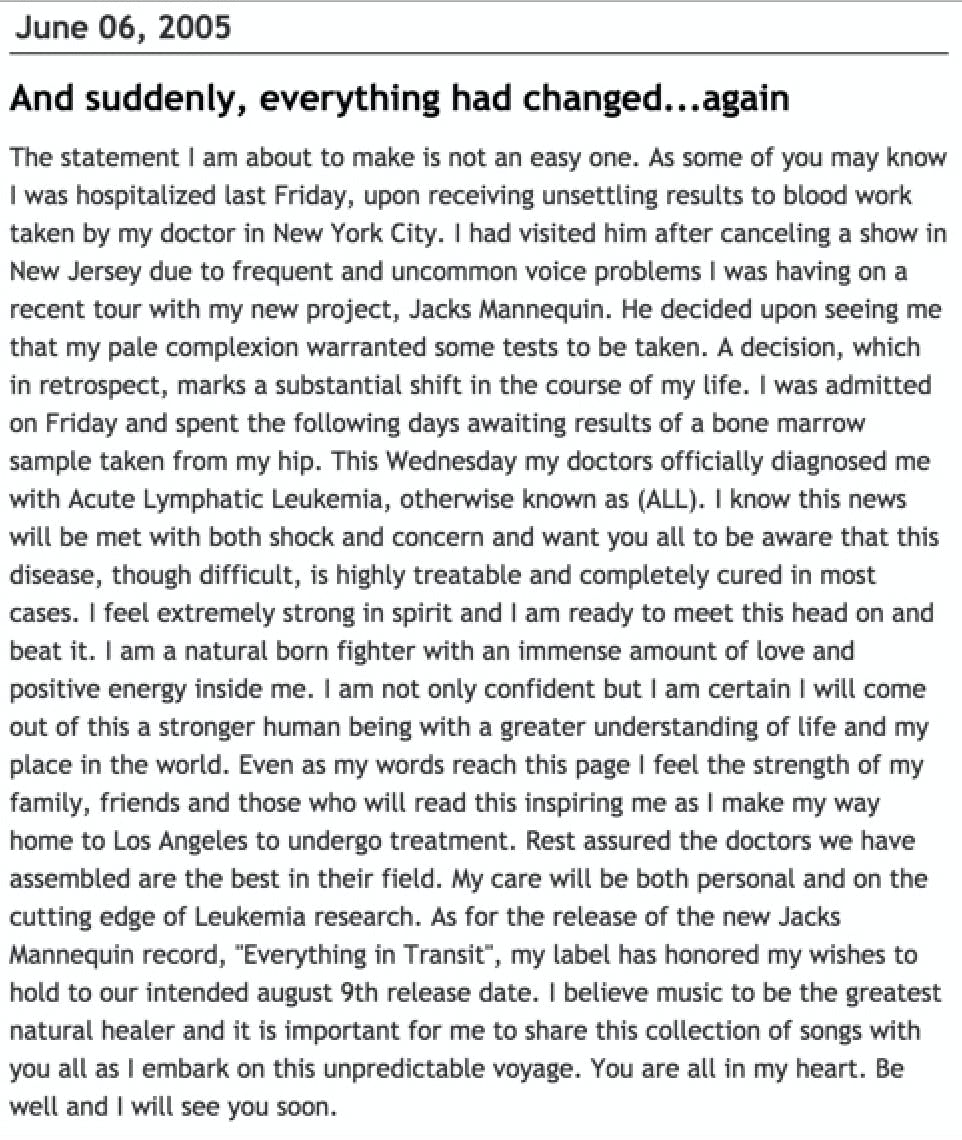 Each post was deeply personal. During his illness, he was not able to tour—blogging was his outlet and connection to fans. I knew more about him than I knew about some of my friends.

To make matters worse Jack’s Mannequin had a debut album, Everything in Transit, to tour behind that summer. But after a stem cell transplant that December, he got better and back out there.

Just a year after his cancer diagnosis, McMahon started the Dear Jack Foundation, a nonprofit that raises awareness and funds for adolescents and young adults diagnosed with cancer. These days at his shows—he performs as Andrew McMahon in the Wilderness—the Love Hope Strength foundation is present so concertgoers can get their cheeks swabbed and be added to the bone marrow donation registry.

Last year, McMahon and the Dear Jack Foundation embarked on their first large-scale fundraising campaign. The 72K challenge aided 72,000 adolescents and young adults who were newly diagnosed with cancer. This year, they’re upping the ante and are hoping to raise $100,000.

It’s an ambitious goal, but thanks to the support from fans and other bands, it is doable. Panic! at the Disco joined the movement in 2015, and McMahon thinks that their younger audience latched on to the cause because they are the ones most affected.

“It spoke to their fanbase and [it] gave us the kind of look across all of these platforms that we really needed to make an impact,” he says.

Had a visitor at sound check yesterday. The Oakland Vibes were on point last night, now it's time to get this LA party started. Photo [email protected]

McMahon also notes that he has been blessed with fans who are supportive and loyal. “I’ve never been subjected to the type of negative experiences that I know people in my line of work have been subjected to online, and I don’t know what accounts for that,” he says. “The things that I do share are treated and handled in a more respectful way.”

I tell him that I went to see his show with friends recently. We stood in front of the bone marrow registry booth, realizing none of us could get our cheeks swabbed because we were already on the registry.

Hey, it’s what you do for a friend.

Correction: An earlier version of this story misidentified the foundation that attends McMahon’s shows.